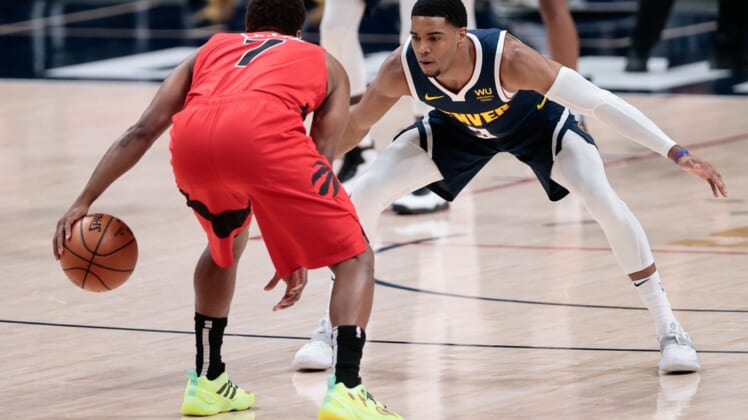 JaMychal Green scored 15 points, Facu Campazzo had 12, Shaquille Harrison and Austin Rivers scored 11 each and P.J. Dozier added 10 for Denver (42-21), which has won four in a row.

The Raptors played without guard Fred VanVleet due to a hip injury.

The Nuggets led by just two after three quarters but started to pull away against Toronto’s reserves in the fourth. Paul Millsap scored four points and Porter had five in a 9-0 run that extended the two-point advantage to 11 at 96-85 lead.

The Raptors called a timeout, but Dozier and Green hit 3-pointers to make it 102-85. Lowry broke Toronto’s drought with a 3-pointer with 7:59 left, but Green split two free throws and Lowry was called for a flagrant foul on a layup by Dozier with 7:13 left.

Dozier hit the free throw and then Green made it a six-point trip with another basket from behind the arc to put Denver ahead 109-88.

Lowry hit another 3-pointer but the Nuggets were able to close it out.

Neither team led by more than five points in the first quarter and the biggest lead was six, by Denver, late in the second. Toronto quickly tied it at 50-all.

Campazzo made five free throws in the final minutes, and Harrison’s jumper with 4.2 seconds left gave the Nuggets a 59-57 lead.

The Raptors took a 63-61 lead early in the third, and the game stayed close through most of the period. Denver went ahead 81-75 on a steal and layup, but Yuta Watanabe and Birch made 3-pointers in an 8-2 run that tied it.

Harrison went 2-for-4 from the line and Dozier hit a layup and the Nuggets took a slim 87-85 lead heading into the fourth.