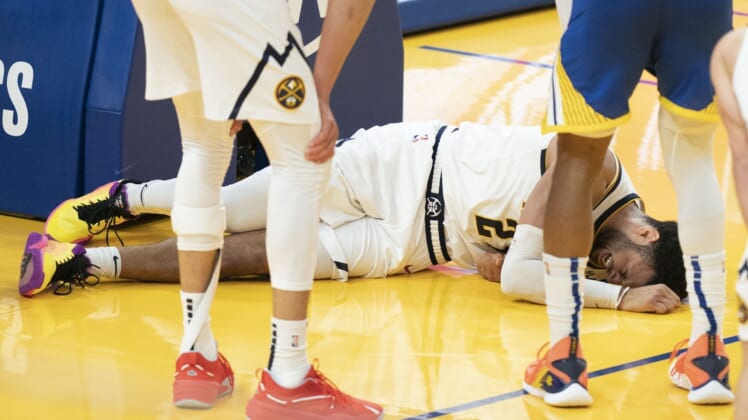 The Denver Nuggets have lost Jamal Murray to a season-ending knee injury, and likely any real hopes of winning the NBA title.

With the Nuggets’ title odds doubling minus Murray, PointsBet made any outright winner bets risk-free. The book will pay winning bets should Denver go on to win the title but will refund any losing bets.

The Nuggets’ odds took similar hits across sportsbooks, with SportsBetting.com lengthening their title odds from 16-1 to 22-1 and their conference title odds from 8-1 to 12-1.

Denver has been one of the most volatile NBA title bets at FanDuel for the past few weeks.

The sportsbook told Field Level Media the Nuggets were 24-1 longshots as recently as March 26. With Denver in the midst of an eight-game winning streak while winning 17 of 20 overall, those odds had shortened to as low as 14-1 by Friday.

Then came the disastrous two-day stretch that saw Denver fall apart in a loss to Boston on Sunday and then lose Murray in another loss to Golden State on Monday night.

By Tuesday, the Nuggets’ odds at FanDuel had lengthened to 30-1.

Murray, 24, sustained the injury with 50.6 seconds remaining in Denver’s 116-107 loss on Monday. His knee buckled as he drove toward the basket and fell to the court, immediately clutching at his left knee and then pounding the court in pain.

Murray was escorted straight to the locker room after the fall, which came at the conclusion of a 17-point night.

The Denver Post reported his recovery is expected to range from between nine to 12 months. His surgery has yet to be scheduled, per the newspaper.

“He just came back,” Nuggets coach Michael Malone said following Monday’s loss. “He was gone for four days. His knee’s been bothering him. He took those four games to try to get right. First game back, obviously. It’s just an awful feeling.”

Murray averaged a team second-best 21.2 points to go along with 4.8 assists and 4.0 rebounds in 48 games (all starts) this season.

The Nuggets (34-20) are in fourth place in the Western Conference standings. They are scheduled to host the Miami Heat on Wednesday night.