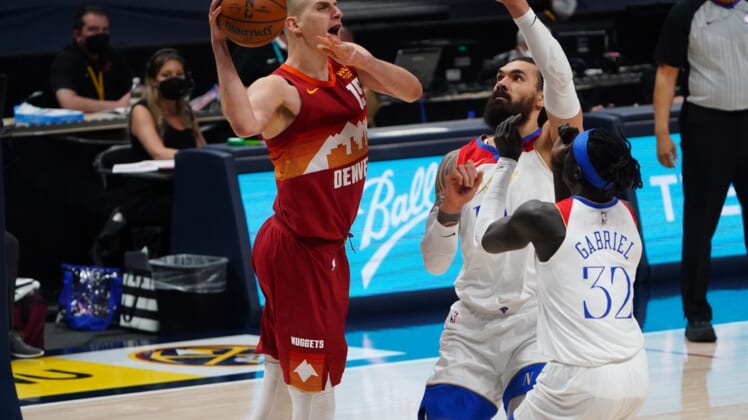 Nikola Jokic had 32 points and had a key block in the final seconds, and the host Denver Nuggets held on to beat the New Orleans Pelicans 114-112 on Wednesday night.

Facu Campazzo had a career-high 19 points and 10 assists, Michael Porter Jr. scored 28 and Aaron Gordon finished with 10 points for Denver (41-21)

The Pelicans cut a 13-point deficit to two points in the final seconds when Jokic turned it over on an inbounds pass with 9.9 seconds left. Ingram got the ball, drove to the lane and dished to Williamson. He went up for a game-tying dunk but Jokic blocked it, and the Nuggets held on.

After two free throws by Campazzo, Bledsoe banked in a 3-pointer, Porter dunked it and Ingram hit another 3-pointer with 9.9 seconds left, setting up the final sequence.

It was 87-78 after three quarters and the Pelicans trimmed Denver’s lead to five early in the fourth. Campazzo’s two free throws made it 91-84 and Williamson and Hayes hit two foul shots apiece to make it 91-88.

Campazzo answered with a 3-pointer, Williams scored on a finger roll and then the Nuggets scored the next nine points, the last on Porter’s 3-pointer to give Denver a 103-90 lead.

The Pelicans didn’t go away. Bledsoe made a pull-up jumper and then fed Willy Hernangomez for a dunk and then Ingram scored off a turnover to make it 103-96 with 4:19 left.

Campazzo came through again for Denver, hitting two 3-pointers from the top of the circle around an Ingram miss to get the lead back to 13.