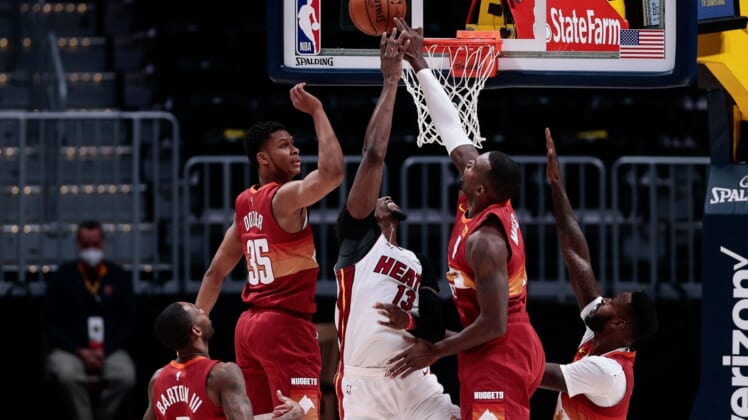 Michael Porter Jr. had 25 points and 10 rebounds, Nikola Jokic produced his 15th triple-double of the season and the host Denver Nuggets beat the Miami Heat 123-106 on Wednesday night.

Denver continued its stretch run to the postseason without Jamal Murray, who sustained a torn ACL in his left knee on Monday night. Morris got the start at point guard, and more help could be on the way. The Athletic reported that the Nuggets were ready to sign guard Austin Rivers to a 10-day contract.

Miami led by five after the first quarter and was ahead 39-35 following a dunk by Butler with 8:51 left in the second quarter, but the Nuggets controlled the rest of the half. They used a 17-2 run to go ahead by 11 and stretched it to 14 on two free throws by Jokic.

Ariza hit a corner 3-pointer at the second-quarter buzzer to cut the Heat’s deficit to 60-49 at halftime.

Miami trimmed Denver’s lead to 73-66 midway through the third before the Nuggets started to pull away. Will Barton hit a 3-pointer for his first points of the night, and Dozier made a jumper and a 3-pointer to put Denver up 88-73 with 3:38 remaining in the third.

The Heat’s Precious Achiuwa and Andre Iguodala hit shots to cut into the deficit, but Facundo Campazzo’s 3-pointer just before the end of the period put the Nuggets ahead 96-79 heading into the fourth.

Dozier, Green and Campazzo made 3-pointers early in the fourth, and after Gabe Vincent made one from behind the arc for the Heat, Porter hit another from deep to give Denver a 108-87 lead.