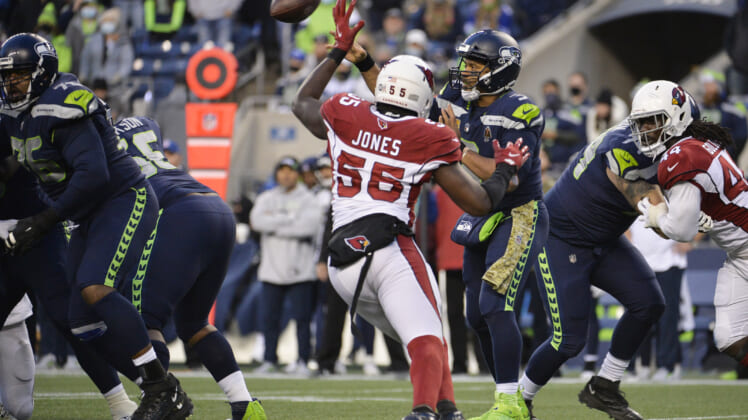 The Denver Broncos have already arguably made the biggest splash of the offseason with their Russell Wilson trade. But they’re far from finished building this roster to compete in 2022. One of their top priorities, now that they’ve secured a quarterback, is edge rusher, which could lead to a Chandler Jones signing.

We’ve also heard of Von Miller having an interest in a potential reunion now that he accomplished his goal of winning a Super Bowl after being traded to the Rams. Which, after the Russ trade, may only make Miller even more eager to rejoin his old team.

If Miller does land elsewhere, like back in L.A. for a repeat Super Bowl run, the Broncos could very well turn to Jones instead.

According to James Palmer of the NFL Network, Broncos fans should keep Chandler Jones in mind when dreaming of a lethal duo opposite of Bradley Chubb. He also notes that Von Miller hasn’t been ruled out yet either.

Both players are highly accomplished pass rushers, both have a Super Bowl ring, though Miller now has two.

For Jones, he’s coming off a 10.5 sack effort, in which he was named to the fourth Pro Bowl of his career. At 32 years old, Jones isn’t showing any signs of slowing down his production just yet. He’d be a great fit on a short-term deal for the Broncos if they desire to go all-in on 2022 with Wilson under center.

The Broncos are currently projected to enter free agency with roughly $26 million in cap space, which is more than enough to strike a deal with Jones, or Miller in free agency. Either signing would give the Broncos a nasty pass-rush duo along with Chubb and likely set them on a path to true contention.

Related: Are the Denver Broncos built to win the Super Bowl next season?