Sep 12, 2021; East Rutherford, New Jersey, USA; Denver Broncos wide receiver Jerry Jeudy (10) is taken off the field after being injured in the game against the New York Giants during the second half at MetLife Stadium. Mandatory Credit: Dennis Schneidler-USA TODAY Sports

The Denver Broncos put wide receiver Jerry Jeudy and cornerback Ronald Darby on injured reserve Tuesday with ailments sustained in their season opener against the New York Giants on Sunday.

Jeudy, the Broncos’ first-round pick in 2020, suffered a high ankle sprain in the third quarter of Denver’s 27-13 victory. He had caught six passes for 72 yards before he was injured and carted off the field. He is expected to miss four to six weeks. 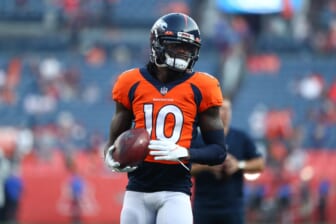 Darby played all 61 snaps on defense and tied for the team lead with six tackles, but an evaluation Monday revealed a hamstring injury. He will miss at least three weeks, the minimum for an injured-reserve stint.