For general manager George Paton of the Denver Broncos, it’s well known that he needs to address the starting quarterback situation this offseason. New head coach Nathaniel Hackett has ties to Aaron Rodgers from three seasons in Green Bay, but there’s no guarantee he’ll be available, or that they can land him via trade if he is.

Either way, they must improve from Drew Lock under center.

One of the easier ways to add a player is in free agency and with the Broncos projected to have roughly $40 million that could be an option. Though with the top option being Jameis Winston and not much else, the Broncos might prefer to keep their focus on the draft prospects.

This isn’t a bad option either considering they have the ninth selection in April’s draft. Not to mention, the Broncos have known all season, they need a better future at the QB position, they’ve likely had a high priority placed on scouting the quarterback prospects all throughout the college football season.

Even though they’re prepared to add to the QB room, the Broncos can only control their part of the equation, they can’t control who’s available for trade, free agency, or the quality of the incoming draft class.

There’s a widespread belief that the 2022 draft class for quarterbacks isn’t as impressive as what we’ve seen the last two years, with Joe Burrow, Justin Herbert, and Trevor Lawrence all entering the NFL since 2020. Yet, nobody knew who Tom Brady was back in 2000 either. My point is, there is usually at least one good if not great quarterback available in each draft, it’s up to the Broncos to find him.

For their GM George Paton, he at least believes there’s talent to be found in this class of QB prospects as he gets a closer look at their skills during the 2022 Senior Bowl.

“You weigh the free-agency class compared to the draft class, and that’s what we’re doing now,” Paton said. “If we don’t think the draft class is very good, we’re probably going to try to go heavy into free agency or the trade market. But I think there’s some talented guys in this rookie class, so we’ll weigh that as we will other positions. What are the strengths of free agency compared to the draft, and if the draft isn’t strong at a certain position, we’re going to be very aggressive in free agency.”

Denver Broncos GM George Paton in an interview with DenverBroncos.com

The other benefit the Broncos have is their newest hire, Nathaniel Hackett, who is expected to have a big say in the next quarterback in Denver, which makes sense considering he’ll be the one coaching him. From his time working with Aaron Rodgers and Jordan Love, his new GM has high expectations for Hackett’s ability to help recognize and develop a young QB in Denver.

“Part of the appeal of Coach Hackett is his ability to develop younger players, and especially quarterbacks,” Paton said, “so he’s going to have a big-time role, as will the other coaches, in our free-agency process, as well as our draft process.”

The Broncos have already met with Malik Willis and Kenny Pickett at the Senior Bowl, both players are expected to go in the first round of the NFL draft. They represent just a fraction of the top draft-eligible quarterbacks, but there is no consensus top QB prospect who has emerged from the pack just yet. 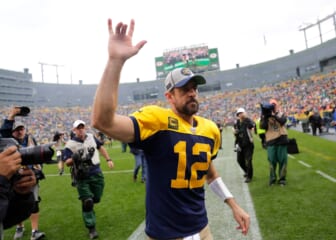