An ironman on the Denver line, Bolles was injured in the fourth quarter of the Broncos’ win over Washington on Sunday. Bolles has missed just one game in five seasons since being selected No. 20 overall by the Broncos in the 2017 draft. 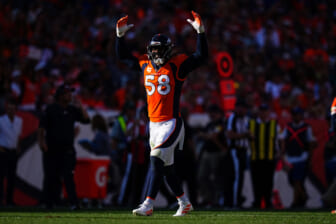 Calvin Anderson would start for Bolles if the latter is unable to play.

“I’m very confident in Calvin,” Fangio said. “I think Calvin’s a good offensive lineman and we’ll be able to operate with him in there. I have total confidence in Calvin.”

The Broncos are also awaiting MRI results on cornerback Bryce Callahan, who also left Sunday’s game, suffering a knee injury in the fourth quarter. He has 21 tackles in eight games (three starts) this season, his second in Denver.