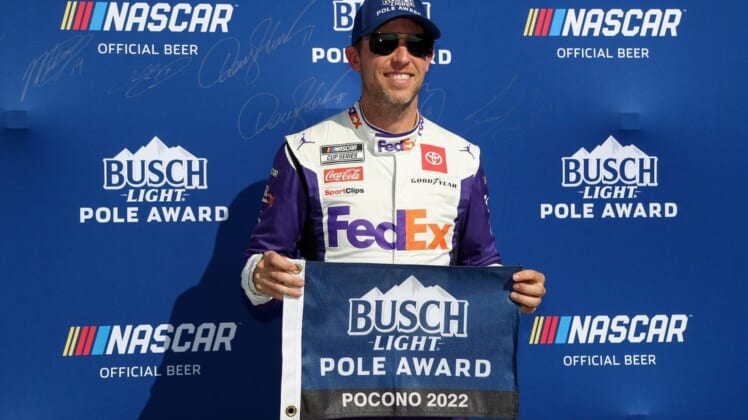 It will be an all-Joe Gibbs Racing front row with Hamlin starting his No. 11 Toyota alongside teammate Kyle Busch, who was second fastest in the No. 18 Joe Gibbs Racing Toyota.

The last time Hamlin qualified on the pole, at Charlotte in May, he went on to win the race. And he already boasts a stellar resume at Pocono. His six wins at the track are tied with NASCAR Hall of Famer Jeff Gordon for the NASCAR Cup Series-most at the track.

“As long as it keeps driving like that, it’s all good,” Hamlin said with a smile. “Just made some big strides from practice. The biggest thing is that the team just did a phenomenal job getting this car ready for qualifying. I made some adjustments and it’s good.”

Hendrick Motorsports teammates Chase Elliott and Kyle Larson were third and fourth fastest in qualifying and will make up the second row on the grid, followed by 2016 Pocono race winner Chris Buescher, who will start the No. 17 RFK Racing Ford fifth.

Ryan Blaney, who earned his first career win at Pocono in 2017 will start his No. 12 Team Penske Ford sixth followed by the Toyotas of Bubba Wallace and Martin Truex Jr. Trackhouse Racing’s Daniel Suarez, in the lone Chevrolet, and Kurt Busch rounded out the top-10 starting positions. 23XI Racing’s Kurt Busch, will be starting from the rear of the grid, however, after spinning his No. 45 Toyota into the wall just as he was approaching the green flag for his final qualifying attempt.

In recent weeks there has been a lot of speculation over where two-time NASCAR Cup Series champion Kyle Busch will race after his current contract with Joe Gibbs Racing expires this year.

Conventional thinking expects Busch to continue driving the No. 18 Toyota for the Joe Gibbs Racing organization where he’s raced for the last 16 seasons (dating back to 2008) and earned 56 of his 60 race wins and a pair of series championships in 2015 and 2019.

And while there doesn’t appear to be any immediate news on the situation, the race team has said it wants Busch back and is looking intently for a sponsor. On Saturday at Pocono Raceway, Busch also echoed his desire to remain at JGR next season.

“We’re all working as hard as we can obviously, and the goal hasn’t changed, and that goal is for me to be able to continue at Joe Gibbs Racing with Toyota and have that chance to continue to race for race wins and race for championships,” Busch said.

“That’s what everybody is striving for. That’s the first goal and we’ll continue to try to push for that.”

Busch has already qualified for the 2022 NASCAR Cup Series Playoffs with a victory in the Bristol (Tenn.) Dirt Race this Spring. He has six top-five and 11 top-10 finishes (including that win and runner-up showings at Charlotte and Gateway) through the opening 20 races. He’s currently ranked sixth in the series driver standings and will be starting on the front row of Sunday’s Pocono race.

His Kyle Busch Motorsports team won Saturday’s NASCAR Camping World Truck Series race at Pocono with driver Chandler Smith, and he has two trucks (driven by Smith and John Hunter Nemechek) that have advanced into the 2022 series Playoffs.

“I mean, you’d like to be done obviously,” Busch said of making sure the contract talks don’t distract from his title hopes. “So certainly, that would be key but obviously, you’ve got to kind of weigh out everything that’s in front of you and see what the best thing is not only for myself, in Kyle, for my family and of course, the KBM (Kyle Busch Motorsports) family.”

This year’s Daytona 500 winner, Austin Cindric became the first race winner of the 2022 season, but 20 races later, the Team Penske rookie acknowledges even that big victory may not provide a sure-bet Playoff appearance.

With six races left to set the 16-driver field there are already 14 different race winners. Cindric goes into Sunday’s race ranked 10th in the Playoff outlook as it is now. Ryan Blaney and Martin Truex Jr. are both inside the Top 16 in points but have not won a race yet. Should there be more than 16 winners heading into the Playoffs, the drivers with just one win will revert back to points to decide who makes the 16-driver postseason field.

“There is certainly a domino effect,” Cindric said. “I think you have to be cognizant of it.”

“That points picture is incredibly tight so it certainly could be a talking point,” he added. “From my standpoint, I just do my job and try to stay above that top 16 and the rest will work itself out.”

ALLGAIER TO LEAD XFINITY SERIES FIELD TO GREEN AT POCONO

Allgaier, driver of the No. 7 JR Motorsports Chevrolet earned the top starting spot as the last qualifier with a lap of 168.669 mph around the 2.5-mile Pocono (Pa.) Raceway — his 12th career pole position, but first at Pocono. A three-time winner — all his victories coming since May — Allgaier, 36, has moved into second place in the NASCAR Xfinity Series championship, only 16-points behind leader A.J. Allmendinger.

Joe Gibbs Racing driver Ty Gibbs will start his No. 54 JGR Toyota alongside Allgaier on the front row, hoping to snap out of a little funk. He’s finished outside the top-20 for the last two races — the first time in his career he’s had that misfortune in back-to-back race weekends. He dropped to third in the standings last week and now trails Allmendinger by 28-points.

Gibb’s JGR teammate Brandon Jones — who was fastest in practice — will start third Saturday, alongside Allmendinger on the second row. Sammy Smith and Sheldon Creed make up the third row on the grid.

Two-time NASCAR Camping World Truck Series champion Todd Bodine made his 800th and final NASCAR national series start Saturday but was collected in an accident only 12 laps into the race.

“I’ve been so blessed to do what I love to do for 800 times,” said Bodine, who now works as a race broadcaster for FOX Sports. “Pretty blessed life to have.”

As for the early ending, “That’s racing,” Bodine said managing a smile. “I’ve been here before. I’ve been wrecked before. That’s part of the game.”

“Thank you to all the fans who supported me all these years, it’s truly meant the world to me, and I have appreciated it. I’ll see you on TV.”