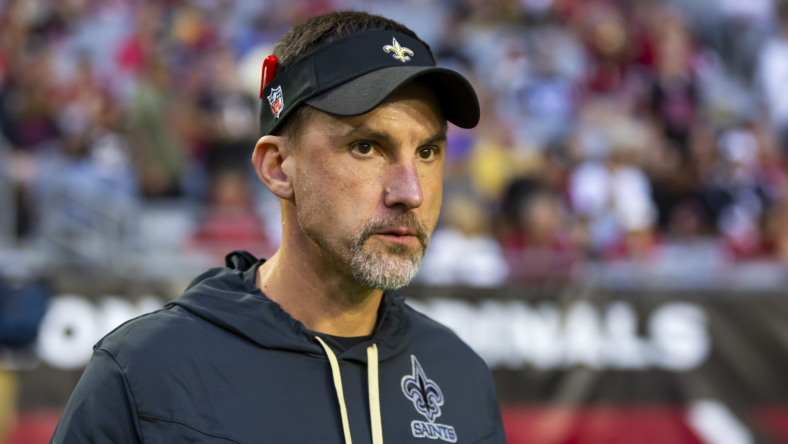 In his second stint as an NFL head coach, Dennis Allen has not done himself many favors with the New Orleans Saints.

The team heads into Monday night’s game against the Baltimore Ravens with a 3-5 record with losses to pedestrian teams such as the Carolina Panthers and Arizona Cardinals mixed in.

But things could very well be turning around for this squad following a shutout 24-0 win over the Las Vegas Raiders last week. In particular, a defense that had disappointed earlier in the season stepped up and saved the Saints from a miserable existence moving forward on the campaign.

For Allen and the Saints, Monday night’s home outing against Baltimore is huge. With a win here, they’d actually be tied with the Atlanta Falcons and Tampa Bay Buccaneers for first place in the NFC South. A loss would have New Orleans closer to the division cellar than first place. Allen knows the significance of this game.

As much as this is important for the Saints, Allen’s own reputation might depend on what the team does as the season progresses. Here’s a look at why this is an absolutely huge game for the head coach and his team.

Anyone coming in to replace the greatest head coach in franchise history would be facing an uphill climb. Payton built a program in Nola. He built an atmosphere of winning. It’s actually one of the reasons an in-house candidate in Allen was picked to replace Payton. Keep the continuity going and the like.

But let’s be clear here. Allen wasn’t your ordinary head coach candidate leading into the process. Now 50 years old, the Texas A&M grad spent two-plus seasons as the head coach for the then-Oakland Raiders from 2012-14.

He was fired following a Week 4 loss to the Miami Dolphins in London. Thus, ended a drama-filled tenure between Allen and the Raiders.

As the story goes, Allen was actually fired over the phone by then-Raiders general manager Reggie McKenzie after the aforementioned blowout loss to Miami.

This came in the midst of a season in which the Raiders started then-rookie Derek Carr under center. An 0-4 start for the team was not up to snuff. In turn, questions arose about Allen’s ability to be a head coach.

Allen finished his Raiders tenure with a disastrous 8-28 record. One season later, and he landed in New Orleans as the Saints’ defensive coordinator under Payton. He performed extremely well in that role, overseeing improvements from this unit on a near-annual basis.

Even then, there were questions about whether Allen was simply a good coordinator and unable to lead an entire team. New Orleans’ regression on defense prior to last week’s shutout win over Allen’s former Raiders team added another layer to this belief.

A couple weeks after throwing two pick-sixes in an ugly loss to the Cardinals, Andy Dalton will get the start Monday night over Jameis Winston. This was Allen’s decision, and he continues to stand by it.

Dalton’s presence on Monday night will be felt with a former NFL MVP in Lamar Jackson going up against him. A similar performance to what we saw in a Week 7 loss to the Cardinals would lead to questions about Allen opting to stick with the veteran signal caller.

Dalton, 35, did rebound from that terrible outing against Arizona by completing 22-of-30 passes for 229 yards with two touchdown in last week’s win over the Raiders.

But it’s safe to say that the quarterback will need to lead his team up and down the field to match what Jackson will bring to the table on the other side of the ball. The onus is also on Alvin Kamara to continue producing at a high level after gaining 158 total yards in Week 8. That’s magnified with wide receivers Michael Thomas and Jarvis Landry sidelined.

As noted above, a home win over Baltimore would have the New Orleans Saints in a three-way tie for first place in a wide open NFC South. They also have a rather favorable schedule leading into a Week 17 outing against the undefeated Philadelphia Eagles.

That’s six consecutive games against teams who are not currently over .500 with the San Francisco 49ers acting as the best of the group.

If New Orleans can come out of this stretch over .500, it would set things up well to earn a playoff spot. If the team continues to struggle against marginal opponents, it will then say a lot about the Saints and the future of Dennis Allen as their head coach.