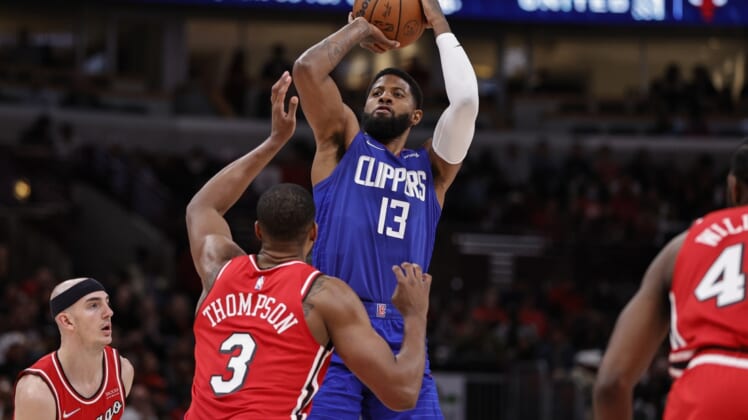 DeMar DeRozan scored 10 of his season-high 50 points in overtime as the Chicago Bulls rallied from a 16-point, second-half deficit to beat the visiting Los Angeles Clippers 135-130 on Thursday.

DeRozan’s dunk with three seconds left in OT sealed the comeback victory for Chicago (45-32), which never trailed in overtime after falling behind by 11 with 4:58 remaining in regulation.

Nikola Vucevic tallied 22 points and 14 rebounds for the Bulls, who have won three of their past four games. Zach LaVine added 21 points, Coby White had 11 and Patrick Williams contributed 10 points and 12 rebounds.

The Bulls trailed by two with 3.5 seconds left in regulation before DeRozan was fouled on a 3-point attempt, giving him three foul shots.

DeRozan made his first two shots to tie the game but missed his third attempt, sending the game to overtime.

DeRozan hit 17 of 26 field-goal attempts and was 14 of 15 from the foul line. He also logged five rebounds and six assists.

The Clippers set the tone early by taking a 32-22 lead after shooting 61.9 percent in the first quarter. Morris, who scored a combined five points in his previous two games, had 10 points in the opening period Thursday.

The Clippers shot 55 percent from the field in the first half while holding the Bulls to 38.8 percent shooting.

Los Angeles stretched its lead to 79-63 when George drilled a 3-pointer with 5:50 left in the third quarter.

The Clippers carried a 10-point lead into the fourth quarter before Chicago cut the deficit to 99-94 on Williams’ dunk with 7:36 remaining.

George, who was playing his second game after missing three months with an elbow injury, finished with four rebounds, five assists and three steals in 32 minutes.