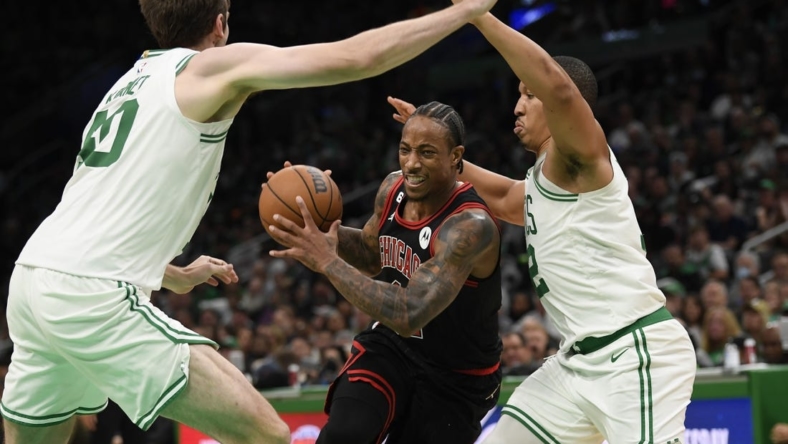 DeMar DeRozan will see a lot of his former team on Sunday when his Chicago Bulls visit the Toronto Raptors in the opener of a home-and-home series.

The teams will meet again in Chicago on Monday.

DeRozan scored a season-best 46 points in a 123-119 loss to the Boston Celtics on Friday.

“He was just spectacular,” Bulls coach Billy Donovan said of DeRozan. “He has a refuse-to-die attitude. His scoring kept us close and gave us a chance late. He was incredible.”

The Raptors lost 111-110 to the Dallas Mavericks on Friday despite a furious comeback without Pascal Siakam, who left late in the third quarter with what the team said was a right groin strain.

“(Siakam) slipped there,” Raptors coach Nick Nurse said. “Looks like it’s something in the groin. We’ll get the imaging and stuff done.”

Toronto already was playing without Fred VanVleet (back) for the third consecutive game.

“We had practice (Thursday), he went through full practice,” Nurse said. “I thought he’d probably be going (Friday). I’m expecting him back pretty soon.”

DeRozan will be facing the Raptors for the 11th time since he was traded to the San Antonio Spurs before the 2018-19 season. That deal sent Kawhi Leonard to Toronto.

He is averaging 23.8 points in his 10 games against the Raptors. DeRozan played nine seasons for Toronto.

“If we’re having a great game from DeMar, we’re going to play off him,” Zach LaVine said. “(DeRozan) was rolling.”

It was not enough, however.

“Self-inflicted mistakes,” DeRozan said. “The game came down to that.”

The Bulls won three of four meetings with the Raptors last season, with the loss coming in Toronto. In the four games, Bulls center Nikola Vucevic had 54 rebounds, a 13.5 per game average.

The Raptors had some notable accomplishments on Friday.

OG Anunoby, who led the Raptors with 27 points, also had five steals. He has 16 steals over the past three games.

“For me, he just looks like he’s got his rhythm back,” Nurse said of Anunoby. “Maybe getting in better game shape. To me it’s noticeable how quick he is to the ball, in gaps, swiping at the ball. It’s noticeable here in the last few games.

“That’s been his thing since he got into the league, but it just looks like he’s moving better and it’s showing up at the other end, too. He’s getting to the rim better. Finishing better. A lot more composed and balanced at the rim too.”

“Chris was awesome,” Nurse said after the game in San Antonio. “He was everywhere. Sometimes he doesn’t always do the right thing but he makes up for it by continuing to play really hard. He can cover his own mistakes with his effort and his length. He was everywhere.”