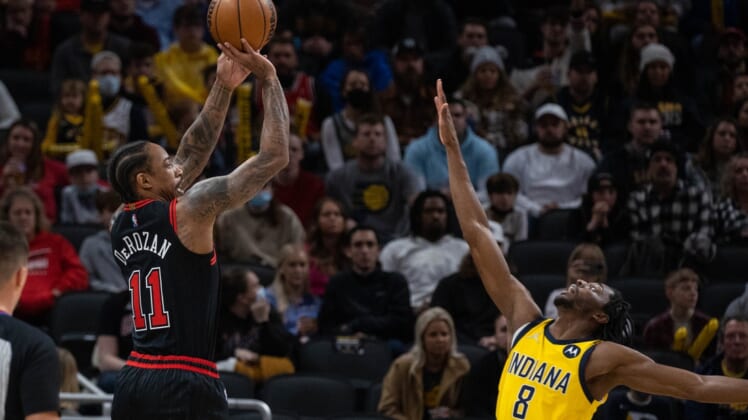 Chicago trailed by six down the stretch, but rallied back behind the usual suspects. DeRozan scored 16 of his points after the break. Zach LaVine scored 17 points and Vucevic had 14 points and 16 rebounds.

The Bulls led the back-and-forth affair by as many as nine points in a game that featured 12 lead changes.

Caris LeVert had 27 points for the Pacers, while Domantas Sabonis (24 points, 14 rebounds) and Torrey Craig (10 points, 11 rebounds) both notched double-doubles.

The Pacers won the rebounding battle 55-42. Indiana committed 17 turnovers compared to 11 for Chicago.

Chicago led 54-50 at halftime, shooting 41.9 percent from the floor compared to 40.9 percent for Indiana. LeVert led all scorers with 15 points at the break, while Sabonis had 14.

DeRozan and White paced Chicago with 12 points. Vucevic had recorded a double-double by intermission, notching 11 points and 11 boards.

Six Pacers missed the game due to the NBA’s health and safety protocols for COVID-19, including Malcolm Brogdon, who had been working back from a right Achilles injury when he was added to the list late this week. T.J. McConnell (right wrist) and T.J. Warren (left foot) also were out for Indiana.

Bulls coach Billy Donovan is “getting pretty close” to returning from COVID-19 protocols, interim coach Chris Fleming said before the game. Five Chicago players missed the game due to protocols.