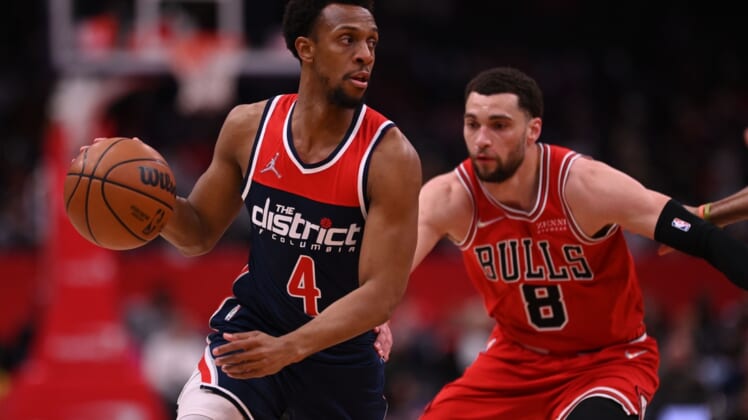 DeMar DeRozan scored 14 of his game-high 32 points in the fourth quarter and Nikola Vucevic had 27 points to lift the visiting Chicago Bulls to a 107-94 win against the Washington Wizards on Tuesday night.

Chicago prevailed to close a five-game road trip with a 2-3 record. The Bulls (44-32) are set to play their next five contests at home before finishing the season on the road at Minnesota on April 10.

The loss ended a two-game winning streak for the Wizards (32-43), who have dropped three of five and nine of 12.

Tomas Satoransky had a game-high 10 assists for the Wizards.

Two nights after drilling 16 3-pointers in a home win against Golden State, the Wizards went 6-for-26 (23.1 percent) from long range Tuesday. Washington entered play ranked last in the league with an average of 10.5 made 3s per game.

Listed as questionable due to left knee soreness and injury management as the team played the second leg of a back-to-back, Chicago’s Zach LaVine scored each of his 14 points in the second half. LaVine missed each of his three field-goal attempts in the first half but shot 4-for-7 after the break.

Vucevic enjoyed a standout first half to boost the Bulls to a 51-46 lead at intermission, scoring 20 points on 9-for-13 shooting. DeRozan followed with nine points.

Washington erased the advantage quickly enough, scoring seven quick points to take the lead, punctuated by a Kispert dunk at 10:21 of the third quarter.

Chicago earned its first season sweep of Washington since the 2010-11 season.