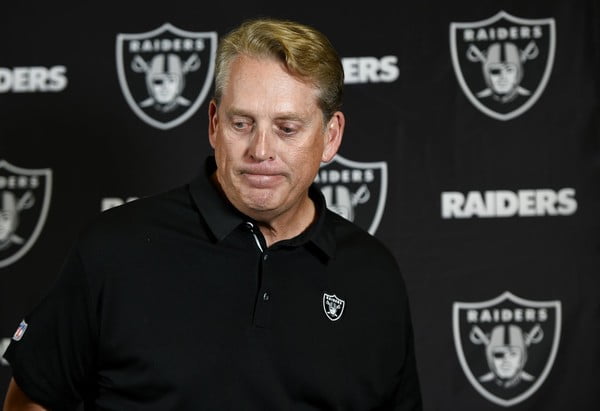 Just days after the Las Vegas Raiders Report published a story the Oakland Raiders were courting Jon Gruden to return to the sideline, the team fired Jack Del Rio after the team appeared uninspired in drubbing by the Chargers.

The end for Jack Del Rio came quickly on Sunday after his Oakland Raiders again lacked discipline and focus in a 30-10 loss to the Los Angeles Chargers. Entering the season as a possible Super Bowl favorite, the Raiders were unable to fix a broken offense and finished 2017 at 6-10, a year after posting a stout 12-4 record.

The dismissal of Del Rio wasn’t a surprise. As first reported by the Las Vegas Raiders Report on Friday, the team had been discussing bringing back former head coach, and current ESPN Monday Night Football analyst, Jon Gruden. Sources had been telling us this week Raiders owner Mark Davis was seriously pursuing the former coach and the interest was deep on both sides.

Still, the abruptness of Del Rio’s firing surprised even those who felt his dismissal was likely.

“I spoke with Mark Davis after the game, and Mark let me know he’s not going to be bringing me back,” Del Rio opened his post game press conference with the news. “He told me he loved me and appreciated all I did to get this program going in the right direction, but that he felt the need to change.”

Del Rio leaves the Raiders having compiled a 25-23 in his three seasons, having served as Oakland’s coach longer than anyone since Gruden coached the team from 1998-2001.

As Friday’s story reported, according to sources close to the parties involved, Davis had apparently lost trust in Del Rio due to his handling of the team’s struggles in 2017. That included the management and poor performance of offensive coordinator Todd Downing. Davis was lobbied heavily that there was serious interest in Downing from other NFL teams that ended up being exaggerated. Del Rio and several of his staff sold Davis on the premise the only way to keep Downing was to offer him the Raiders coordinator job. That led to former Offensive Coordinator Bill Musgrave‘s ouster and the ascension of Downing with the disastrous results seen in 2017.

According to sources inside the Raiders organization, the final straw for Davis appears to have been the team’s “uninspired play” and issues of dysfunction in the locker room. Davis was visibly unhappy several times during the Chargers loss on Sunday.

The attention now turns to what’s next and that appears giving the keys to the Raiders organization on the field to Gruden. The Raiders must first comply with the NFL’s Rooney Rule, which mandates each team interview a minority candidate when they have an opening.

Sources have told us the deal with Gruden is all but done. The timeline appears to dictate a deal signed and Gruden introduced as the Raiders new coach by Thursday, at the latest. The terms of the contract are said to include an annual salary in the $10 Million range.

The way Jack Del Rio stood at the podium with dignity and dealt with losing his #Raiders hometown dream job unexpectedly was remarkable. One of classiest things I've seen. (Don't even bother with the `he's getting paid' argument — it was still remarkable).

What the Raiders did to Jack Del Rio was absolutely classless and gutless….. #Raiders

The #Raiders made the move to fire Jack Del Rio with confidence they could lure Jon Gruden from the broadcast booth. They may have their buzz heading to Las Vegas.

Jack Del Rio was first #Raiders coach fired with a winning record for team (25-23) since Art Shell, who was let go with 54-38 record following 1994 season

We should all thank Del Rio for changing the culture. Now it's time for an offensive-minded HC and fix Derek Carr and the offense team. #Raiders

Del Rio got choked up. Remember, the #Raiders are his childhood team.

But now, the #Raiders will look to hire their Steve Kerr. It's been real JDR…

Another name to watch to join Jon Gruden’s #Raiders staff as he puts it together is Bill Callahan as the OL coach/running game coordinator (& possibly Asst Head Coach).

So far I’ve heard the following: