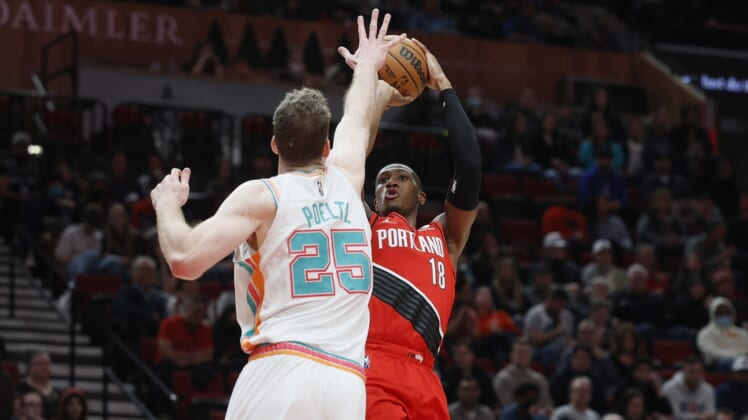 Keldon Johnson made five 3-pointers while scoring 26 points as San Antonio won for the third time in the past four games. Jakob Poeltl blocked a career-best six shots while also contributing 16 points and nine rebounds for the Spurs.

Ben McLemore scored 23 points as Portland (27-45) lost for the 11th time in the past 13 games and fell three games behind the Pelicans. Drew Eubanks matched his career best of 20 points and also grabbed nine rebounds while Elijah Hughes and Trendon Watford had 10 points apiece.

It was the second time San Antonio trounced the Trail Blazers in Portland this season. The Spurs rolled to a 114-83 triumph on Dec. 2.

San Antonio connected on 48.9 percent of its field-goal attempts and matched their season best with 19 3-pointers (out of 44 attempts). The Spurs set a franchise record with 13 3-pointers in the first half.

The Trail Blazers made 38.3 percent of their shots and were 7 of 26 from behind the arc.

Portland opened the game with a 9-2 surge before the Spurs began their domination with runs of 13-0 and 12-0 over the next six minutes. San Antonio shot 9 of 14 from 3-point range in the quarter to take a 45-27 lead.

The Spurs continued their onslaught in the second quarter and held an 81-53 lead entering the break. Murray had 20 points on 7-of-7 shooting in the half. Vassell (four) and Murray (three) combined to make all seven of their first-half 3-point attempts.