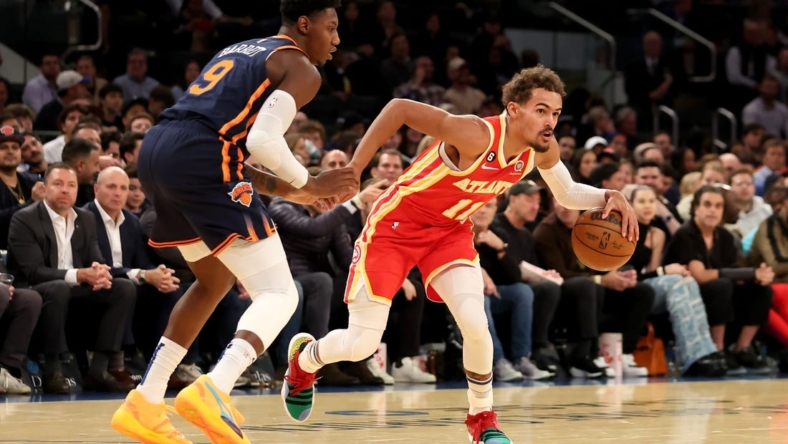 Dejounte Murray scored a career-high 36 points Wednesday night for the visiting Atlanta Hawks, who stormed back from a 23-point, first-half deficit to rout the New York Knicks 112-99.

The Hawks, who played much of the second half without star guard Trae Young as he was treated for a left eye contusion, snapped a two-game losing streak. The Knicks have lost three straight.

Murray helped key the comeback by scoring 15 points in a 29-14 run that ended the second quarter and whittled the Knicks’ lead to 65-57 at the half.

Jalen Brunson had a team-high 20 points and RJ Barrett added 19 for the Knicks. Immanuel Quickley (11 points and a career-high 16 rebounds) had a double-double off the bench. Julius Randle scored 14 points and reserve Obi Toppin added 12.

Halftime didn’t slow down the Hawks, who scored the first 12 points of the third to go ahead 69-65. The Knicks scored six of the next eight points and tied the score for the final time at 71-71 on a layup by Randle with 6:49 remaining.

A putback of his own miss by Onyeka Okongwu started the decisive 24-6 quarter-spanning run by the Hawks, who went ahead 95-77 on Hunter’s dunk with 9:46 left.

Quickley had five points in a 10-2 spurt by the Knicks, after which Atlanta called timeout and head coach Nate MacMillan inserted Young back into the lineup. New York missed its next four shots and the visitors went on an 8-0 run before taking a pair of 19-point leads down the stretch.