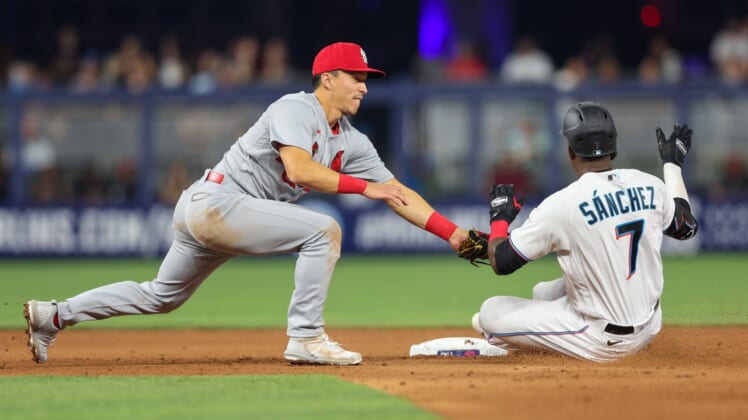 Sandy Alcantara has an important tie to St. Louis.

Both of those facts add extra spice to the Wednesday pitching matchup between Miami Marlins right-hander Alcantara (1-0, 3.18 ERA) and St. Louis Cardinals right-hander Mikolas (1-0, 2.61) in Miami.

After St. Louis beat Miami 5-1 on Tuesday in the series opener, Alcantara hopes to get the Marlins back on track.

Alcantara, who made his major-league debut with the Cardinals in 2017, has morphed into an All-Star with the Marlins. However, he often is a victim of poor run support. For example, in three career starts against the Cardinals, he is 0-3 despite a sizzling 1.40 ERA.

He will look for help from an inconsistent offense that is led by center fielder Jesus Sanchez and third baseman Joey Wendle.

Sanchez went 2-for-4 on Tuesday, improving his batting average to .359. He also had an outfield assist.

“Jesus has been great,” Marlins manager Don Mattingly said of Sanchez, a full-time starter for the first time at age 24. “His at-bats have been really good. He’s just going to keep getting better.”

Another Marlins player to watch is outfielder Bryan De La Cruz, who homered on Tuesday. He is batting .364 in just 11 at-bats but may get more extensive playing time in the immediate future with Marlins starting right fielder Avisail Garcia ailing. Garcia left midway through the Tuesday game due to a stomach issue.

“He was knotting up,” Mattingly said. “It wasn’t going to allow him to finish (the game).”

The Marlins will look for a rare strong game against Mikolas, who is 3-1 with a 3.16 ERA in seven career appearances (five starts) vs. Miami.

Of the National League’s nine Gold Glove winners last year — including the pitcher — five played for the Cardinals.

“We have the best defense in the league,” said St. Louis pitcher Adam Wainwright, who beat the Marlins on Tuesday. “They are incredible every night. It’s so much fun to watch them work.”

Miami’s only run Tuesday came on De La Cruz’s homer. In other words, no cheap runs against St. Louis.

“You don’t expect to be given any gifts,” Mattingly said when asked about the Cardinals’ defense. “You have to earn your runs.”

The Marlins haven’t done much of that, scoring a total of just seven runs in seven games against the Cardinals since the start of the 2021 season. Not surprisingly, the Cardinals have won all seven of those games.

The Marlins, meanwhile, gave away a run on Tuesday on a second-inning error by second baseman Jazz Chisholm Jr.

“It was a bad throw,” Mattingly said. “He didn’t do anything wrong (mentally). It was just a bad throw. It was on the physical side.”