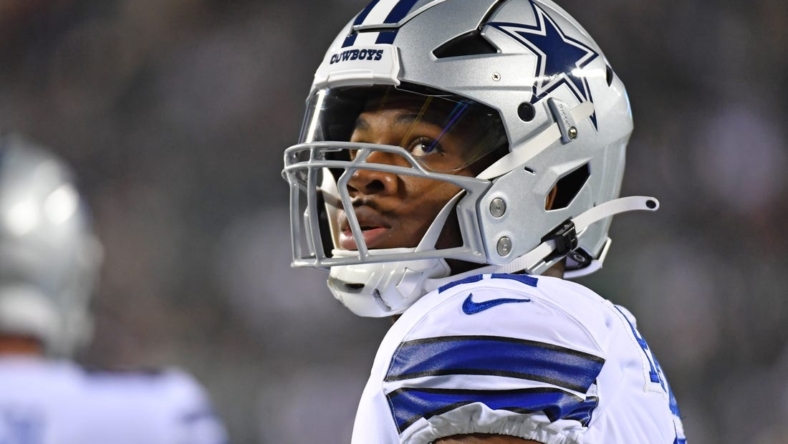 Dak Prescott and the Dallas Cowboys are ready to let their defense do the talking.

“When you have a defense like this, you have to continue to go through the reads and take a check down here or there, and it will pay off,” said Prescott, who starts his third game of the season for the Cowboys (5-2) on Sunday against the visiting Chicago Bears (3-4).

Prescott returned from a thumb injury and five-game absence to guide the Cowboys over the Detroit Lions in Week 7. Rust and timing were there, but Dallas’ rising defense remained the stable pillar of its early success with five sacks of Jared Goff and five takeaways. Dallas is plus-6 in turnover margin this season and on course to set a franchise record for sacks in a season with 29 through seven games.

“I’m just trying to get better each and every day,” Fields said, entering his 18th career start.

Prescott gets a temporary reprieve from defensive end Robert Quinn, traded Wednesday from the Bears to the Philadelphia Eagles. But the Cowboys could be working without running back Ezekiel Elliott on Sunday.

Elliott had his 13th career game with two rushing TDs last week, but an ailing right knee kept him out of practice Wednesday and reports indicate he could miss multiple weeks.

Quinn, 32, is now in line to visit the Cowboys on Christmas Eve as a member of the currently undefeated, NFC East-leading Eagles.

Without Elliott, Tony Pollard could get more time against a Bears’ defense yielding 149.7 rushing yards per game. The Cowboys would need to add a running back to the active roster.

“Whatever they ask of me to carry, I got it,” Pollard said. “They call it, I’m gonna haul it.”

Prior to taking over as head coach of the Bears in January, Eberflus was defensive coordinator of the Indianapolis Colts for four seasons and stuffed the Cowboys 23-0 in 2018. His previous professional stop was in Dallas, where he served primarily as Cowboys linebackers coach from 2011-2017. He left the team to become defensive coordinator under Josh McDaniels for the Colts in 2018, but McDaniels ultimately bailed on the job to stay in New England.

“I was really proud for him (Monday) night,” Cowboys owner Jerry Jones said of Eberflus.

Consistency is not a strong suit for Chicago through seven games, but the Bears steamrolled the New England Patriots, 33-14, on Monday and ride a tailwind of momentum thanks to their own defensive flex. The Bears are giving up 18.9 points per game.

The Bears did not practice Wednesday but did a light walkthrough to retrace the game plan Eberflus installed for the Cowboys after playing a Thursday game against Washington earlier this month.

Headline achievements in New England were four takeaways, limiting the Patriots to 70 rushing yards and Fields looking confident and comfortable moving outside the pocket. Eberflus said the Bears continue to stress “ball security is No. 1” after Fields put the ball on the ground four times at New England.

Still, the Bears have climbed to first in the NFL in rushing — at 181 yards per game — with David Montgomery, Khalil Herbert and Fields combining for seven rushing touchdowns this season. More designed runs are in order for Fields, Eberflus confirmed this week, after his success against the Patriots.

“I think it’s very hard to defend,” Eberflus said. “I’ve tried to defend those guys over the years and it’s very difficult, so we just have to do it the right way. We have to be creative in how we do it.

“We’re committed to it. We’re going to run the ball. When the quarterback has the ability to run, it certainly gives you another element.”

Dallas acquired defensive tackle Johnathan Hankins from the Las Vegas Raiders this week. He was at practice on Wednesday and said he knows enough “to go out there and play and play at a high level” on Sunday.

If so, he’ll be lining up over backup center Sam Mustipher, who’ll start in front of Fields with Lucas Patrick headed to injured reserve.

Moving Fields also prevents him from sitting in the pocket with Cowboys pass rusher Micah Parsons (7.0 sacks this season). They meet again after clashing in college with Fields at Ohio State and Parsons starring for Penn State. Fields was selected 11th overall in the 2021 draft, one spot before Dallas selected Parsons.

If the Cowboys can follow a win over the Lions last week with a sweep of the NFC North, all the fixings should be in place for a holiday celebration next month.

Dallas is headed into its bye week before hitting the road to play the Green Bay Packers (Nov. 13) and Minnesota Vikings (Nov. 20) and a tight turnaround before returning home to host the Giants for Thanksgiving (Nov. 24).