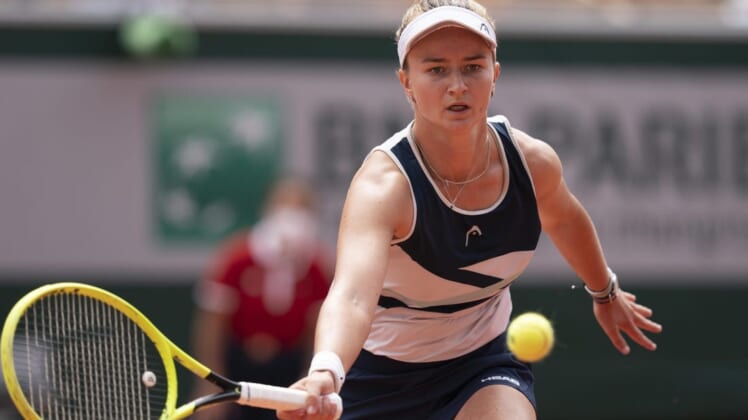 Defending women’s singles champion and No. 2 seed Barbora Krejcikova lost in the first round of the French Open on Monday to 97th-ranked Diane Parry, 1-6, 6-2, 6-3 in two hours, eight minutes.

Krejcikova and Naomi Osaka, a four-time Grand Slam champion, were both eliminated in a surprising opening round at Roland Garros.

Both women came to Paris following injury-related layoffs and rust was evident for the Czech Krejcikova in her first match since February due to an elbow injury.

The French teen Parry, 19, had boisterous support at Roland Garros.

“I’ve always dreamed of playing on this court,” Parry said from center court under the roof with rain causing havoc. “I’d like to thank the fans for their support. They helped me to go for it.”

Parry is the lowest-ranked woman to beat the second seed at Roland Garros since Arantxa Rus beat Kim Clijsters in 2011. Up next for Parry is Colombian Camila Osorio in the second round.

Osaka lost her opening match to fellow American Amanda Anisimova 7-5, 6-4, in a 90-minute rout that left Osaka contemplating whether she will skip Wimbledon, with no rankings points on the line.

Anisimova reached the French Open semifinals in 2019. She had 27 winners to 13 for Osaka on Monday.

“I just was trying to stay aggressive and keep going for my flat shots, because that’s what I thought would help me get the win today,” Anisimova said. “It was a bit tricky for me because it was harder for me to play my game. It was just tough conditions and I think it was just a tough match for both of us today.”

Krejcikova is the third women’s defending champion to drop a first-round match at the French Open since 2005 (Anastasia Myskina; 2017 champion Jelena Ostapenko).

Krejcikova started strong and showed no signs of her bothersome elbow, and took the first four games in 17 minutes. Parry also dropped the first two games of the second set before mounting a momentous rally by landing 67 percent of her second serves.

“I just want to be concentrating on the tennis and not thinking about the numbers,” Swiatek said of the winning streak.