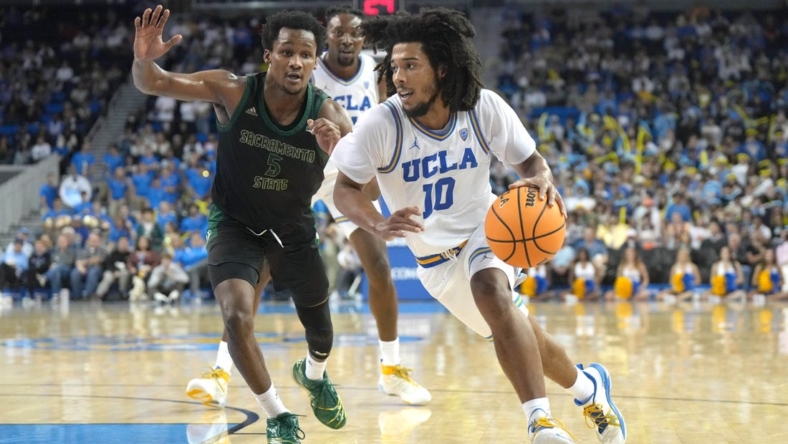 Eighth-ranked UCLA looks to build off a strong start to the 2022-23 season when the Bruins play host to nearby Long Beach State on Friday in Los Angeles.

UCLA (1-0) cruised past Sacramento State 76-50 in the season opener on Monday thanks to a balanced scoring effort and stout defense.

Jaylen Clark opened the campaign with a splash, going a perfect 7 of 7 from the floor for 17 points while also grabbing eight rebounds and seven steals.

“That’s where I get my enjoyment,” Clark said of his defensive play. “I just like going up and taking people out of the game and it creates easy offense for me. I try to be an in-the-flow type player, so it just gets me going. My defense is my offense.”

Clark said among his goals for this season was to break legendary Bruins guard Tyus Edney’s program record of 11 steals in a game.

Along with Clark’s production, UCLA got 14 points apiece from preseason All-American Jaime Jaquez Jr. and Tyger Campbell, 13 points off the bench from David Singleton, and 10 points in the college debut of ballyhooed recruit Amari Bailey.

“I know my role on this team,” Singleton said of coming on in reserve to knock down all three of his 3-point attempts. “We need to have not only our starting five bringing energy but definitely the bench, so I’m excited for this role.”

The Bruins bring that depth into the Friday contest against a Long Beach State team that wound up one win away from reaching the 2022 NCAA Tournament.

The 49ers (1-0) lost the Big West Conference championship game 72-71 to Cal State Fullerton in March, but they ushered in the new season with key contributions from two members of last season’s 20-win team, Joel Murray and Jadon Jones.

Lassina Traore, a 6-foot-10 transfer from Saint Louis, debuted with 13 points and 12 rebounds. His presence could help Long Beach State counter UCLA on the interior.

The 49ers will also aim to offset the Bruins’ depth with some of their own.

“We’re committed to a 10-man rotation,” Long Beach State coach Dan Monson told The562.org following the Monday win. “Guys know they can go hard for a few minutes and then (rest). If they continue to buy into that and not worry about their stats, we’ve got a chance to be a good team.”

Indeed, 10 different 49ers logged at least 10 minutes against Cal Baptist. Nine of the 10 scored five points or more, including Tone Hunter, who dished six assists to go with his five points.

Similarly, UCLA had eight players log at least 11 minutes against Sacramento State. Jaquez played a team-high 32 minutes and grabbed seven rebounds, showing no ill effects from the ankle injuries that limited him down the stretch last season.