Hopkins, in fact, showed his hand Friday on social media.

“Somebody at the gym asked me would I restructure my contract for Julio?” Hopkins wrote on Twitter. He then added a gif of actor Neil Patrick Harris providing an enthusiastic thumbs up gesture. 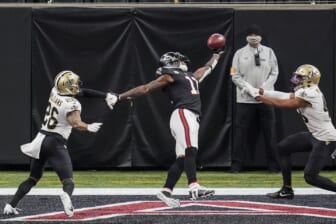 Somebody at the gym asked me would I restructure my contract for Julio ? pic.twitter.com/71mpbcoWhE

Although it’s a defensive coordinator’s nightmare to pair the two high-profile wideouts on the same team, Hopkins likely will need some help in order to entice Jones into joining the Arizona Cardinals. Hopkins’ base salary in 2021 stands at $4.75 million, and he’ll need more than just reducing it to the minimum of $1.075 million to get Jones — whose base salary is $15.3 million.

Per SportsBetting.ag, the Baltimore Ravens (+275) and San Francisco 49ers (+300) have the shortest odds to land Jones should the Falcons elect to trade the wideout. The New England Patriots (+450), Los Angeles Chargers (+600) and Tennessee Titans (+600) are the next teams on the list.

Jones’ career average of 95.5 receiving yards per game is the best in NFL history, but a hamstring injury derailed his 2020 season and third-year pro Calvin Ridley caught 90 passes for 1,374 yards and nine touchdowns.