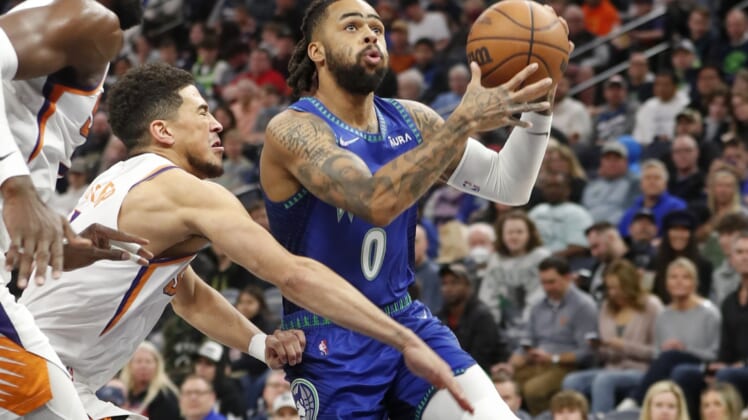 Anthony Edwards paced the Timberwolves (42-32) with 19 points on a night when Towns was held to 15 points and 11 rebounds. Seeking to avoid a two-game losing streak, Minnesota pulled within 104-103 with 5:53 remaining on a 3-pointer by Malik Beasley.

But Ayton converted a Booker pass into a dunk, and Booker then took matters into his own hands with a driving layup and long 3-pointer, creating breathing room at 111-103 with 4:02 left.

Booker added a dunk of his own and four free throws down the stretch as the Suns kept the Timberwolves at arm’s length in completing a three-game, season-series sweep.

The Suns used a 32-point third quarter to chip into a 15-point deficit and tied the game at 88 in the first minute of the final period when Cameron Payne connected on a pair of hoops, the second of which he turned into a three-point play.

Phoenix took the lead for good at 95-94 with 8:35 remaining on a pair of Landry Shamet free throws. Ayton’s double-double featured 15-for-24 shooting and seven offensive rebounds. His 35 points were five more than in any previous game this season. He set his previous career-high as a rookie in 2018 with 33 points against the Denver Nuggets.

Shamet finished with 19 points off the bench for Phoenix, while Mikal Bridges had 16 and Payne 13. Payne also had a game-high nine assists. The Suns outshot the Timberwolves 52.3 percent to 44.2 percent.

Joining Towns with a double-double for Minnesota was Jarred Vanderbilt with 12 points and a team-high 12 rebounds. Beasley and Jaylen Nowell came off the bench for 15 points apiece, while Taurean Prince and Naz Reid chipped in with 10 points each. D’Angelo Russell logged a team-high seven assists, but just six points.