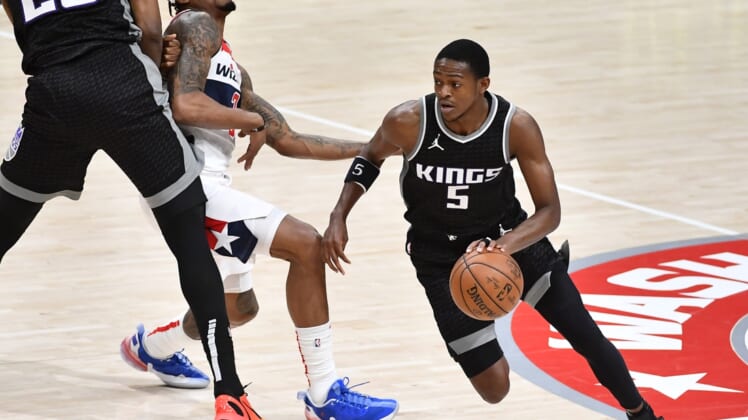 De’Aaron Fox rescued the Sacramento Kings with seven late points, including a tie-breaking 19-footer with 1.3 seconds remaining that provided the difference in a 121-119 victory over the host Washington Wizards on Wednesday night.

Fox scored Sacramento’s final nine points in all to cap a team-high 28-point night that helped the Kings snap a two-game losing streak.

Bradley Beal had a game-high 29 points and Russell Westbrook his 158th career triple-double for the Wizards, who dropped their fifth straight.

Held to 12 points for almost the first 10 minutes of the fourth quarter, the Kings’ offense — namely, Fox — finally came to life after Westbrook had brought the Wizards within 114-113 on a layup with 2:17 to play.

Fox had a three-point play on a driving layup that flipped the switch, creating a four-point cushion at the 2:05 mark.

After Beal misfired on a 3-pointer at the other end, Fox drew a foul and increased the Sacramento lead to 119-113 with a pair of free throws with 1:46 to go.

Westbrook single-handedly drew the Wizards even with two free throws and two layups, the second of the hoops off a Beal assist with 22.6 seconds remaining. That tied the score and set the stage for Fox’s heroics.

The Wizards couldn’t get off a shot on a final desperation possession.

Fox complemented his 28 points with a team-high seven assists and game-high five steals for Sacramento, which led by as many as 11 points and took a 102-93 lead into the final period.

Harrison Barnes chipped in with 18 points and a team-high eight rebounds, while Richaun Holmes also had 18, Tyrese Haliburton 17, Buddy Hield 16 and Cory Joseph 12.

Haliburton and Hield bombed in three 3-pointers apiece as the Kings outscored the Wizards 30-12 from beyond the arc.

Beal’s point total came despite 0-for-5 shooting on 3-pointers for the Wizards, who have opened a five-game homestand with four straight losses.

Westbrook booked 26 points, a game-high 14 rebounds and a game-high 10 assists to move within 23 of Oscar Robertson’s all-time lead in triple-doubles. Westbrook ranks No. 2 on the list.