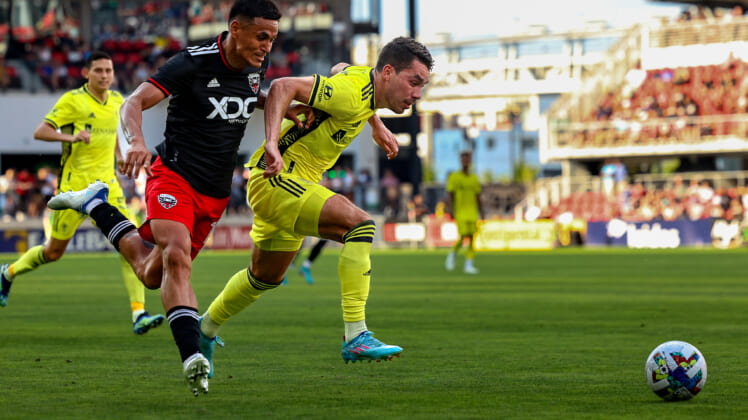 Hany Mukhtar registered his third two-goal match of the season while defender Daniel Lovitz scored a goal en route to leading Nashville SC to a 3-1 win over D.C. United on Saturday.

With eight goals through 17 games, Mukhtar leads Nashville in that regard. He scored his first goal in stoppage time in the first half then again in the 50th minute to help defeat D.C. United (4-9-2).

United saw its six-match winless streak extended despite Taxiarchis Fountas scoring a 59th-minute goal and goalie Rafael Romo turning away two shots himself. For Fountas, his goal tied him with Ola Kamara for the team lead with six.

Nashville is now a resounding 3-0-2 against Eastern Conference opponents this season and boasts a 3-0-1 record against D.C. United all-time. A lot of that had to do with Mukhtar’s performance.

After back-to-back winless matches for Nashville, Mukhtar came to play with a three-point performance to enhance his standing as a legit MVP candidate.

Adding that goal in the 50th minute gave Nashville some breathing room for a 3-0 lead before D.C. United finally got on the board Fountas’ sixth goal of the season.

In the midst of a six-match winless streak, D.C. United will take on Orlando on the 4th of July at 4:00 PM ET. The game will air on NBC Sports Washington and ESPN+. This is a must-win game for interim head coach Chad Ashton after he took over for Hernán Losada back in April.