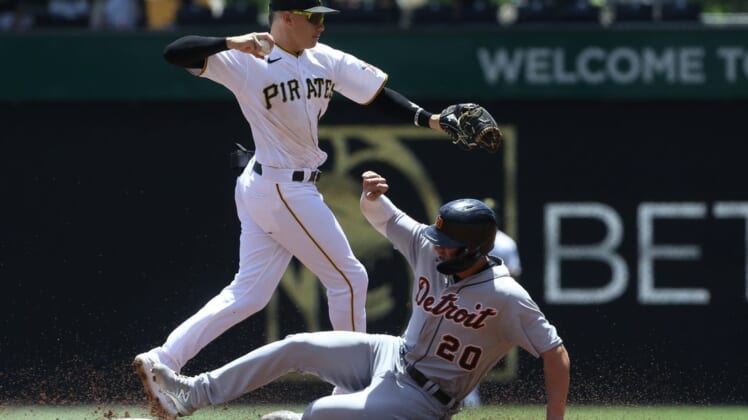 Daz Cameron drove in two runs with a double and a triple to lift the visiting Detroit Tigers to a 3-1 victory over the Pittsburgh Pirates on Wednesday afternoon.

Miguel Cabrera added an RBI single for the Tigers, who completed a sweep of the two-game series.

Faedo initially was going to have his start pushed back after the Tigers decided Tuesday to hold Tarik Skubal out a day because of storms that were expected to interrupt the game that night. The bad weather, however, delayed the game at the onset of the game, and Skubal made his start after all.

Will Vest (1-1) picked up the win after striking out one in a scoreless seventh inning. Gregory Soto retired the side in the ninth inning to secure his 12th save.

Jack Suwinski homered for the Pirates, who were held to four hits.

Wil Crowe (2-3) gave up the go-ahead run in the eighth to take the loss.

Detroit’s Spencer Torkelson led off the second inning with a walk. Eric Hasse reached on a fielder’s choice two batters later and Cameron followed with a two-out triple off the wall in center field to score the first run of the game.

Suwinski forged a tie after leading off the bottom of the fourth inning with his seventh homer of the season.

The bullpens picked up the strong pitching where the starters left off, until the eighth.

Harold Castro singled to left and Jonathan Schoop hit a fly to center in which it appeared that Bryan Reynolds made a slick diving catch. Reynolds, however, was deemed to have trapped the ball for a single, leaving runners at first and second.

Cabrera followed with a base hit to center, driving in Castro for a 2-1 Detroit lead.

In the ninth, Hasse singled to center with two outs against reliever Chris Stratton. Cameron’s RBI double down the line in right made it 3-1.