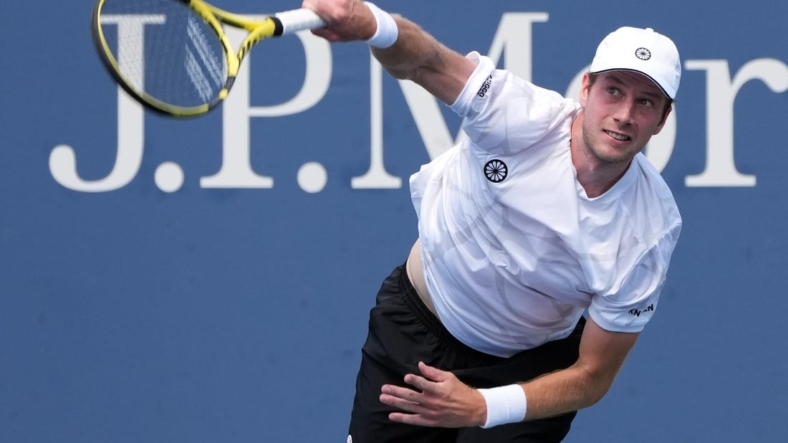 The United States, the Netherlands, Germany and Australia are assured spots in the quarterfinals of the Davis Cup knockout stage after the Netherlands and Germany won their respective group-stage matches Friday.

The Netherlands defeated Great Britain 2-1 in a Group D match to join the U.S. with a 2-0 record. Germany took down Belgium by the same score to move to 2-0 in Group C, on par with Australia.

The group stage is taking place from Tuesday through Sunday in four cities across Europe. The top two teams in each round-robin group will advance to the knockout stage in Malaga, Spain, Nov. 22-27.

The Netherlands fell behind early and had to rally to end the Brits’ hopes of making the playoffs in their match in Glasgow, Scotland.

Daniel Evans of Great Britain defeated Tallon Griekspoor 6-4, 6-4, but Dutchman Botic van de Zandschulp tied it with a 6-4, 6-2 win over Cameron Norrie. It came down to doubles, where the Dutch team of Wesley Koolhof and Matwe Middelkoop took down Andy Murray and Joe Salisbury 7-6 (0), 6-7 (6), 6-3.

It was a similar story for the host Germans in their win over Belgium in Hamburg, Germany.

Roberto Bautista Agut got Spain on the board first by beating Vasik Pospisil 3-6, 6-3, 6-3. Then came Auger-Aliassime’s stunner, as he rallied to hand Alcaraz a defeat in his first competitive match since winning the U.S. Open. The Canadian won 6-7 (3), 6-4, 6-2. Auger-Aliassime and Pospisil then defeated Spain’s Marcel Granollers and Pedro Martinez 4-6, 6-4, 7-5 in doubles to seal the match.

And in Group A, Italy improved to 2-0 with its 2-1 win over Argentina in Bologna, Italy.

The Italians secured the victory during singles, as Matteo Berrettini beat Sebastian Baez 6-2, 6-3 and Jannik Sinner got past Francisco Cerundolo 7-5, 1-6, 6-3. The Argentines managed to win the doubles match, with Maximo Gonzalez and Horacio Zeballos beating Simone Bolelli and Fabio Fognini 7-5, 2-6, 6-3.