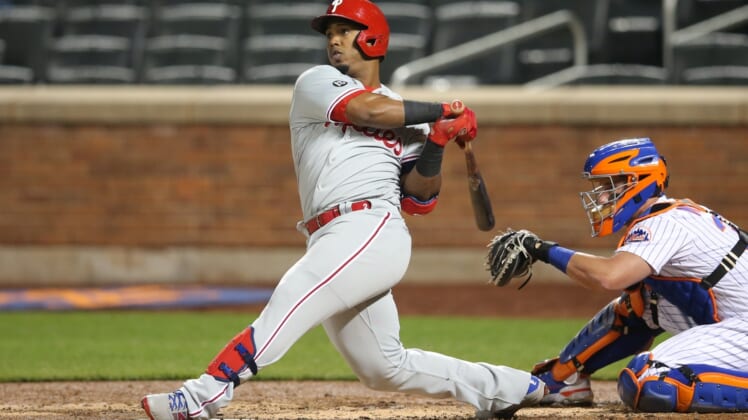 David Peterson tied a career-high with 10 strikeouts and allowed just two hits over six innings in earning the win Wednesday night for the host New York Mets, who beat the Philadelphia Phillies 5-1.

The Mets have won the first three games of the four-game series and will go for the sweep, weather permitting, Thursday afternoon.

Peterson (1-1), who gave up six runs over four innings in his season debut against the Phillies April 7, didn’t allow a hit Wednesday until Jean Segura homered with one out in the fifth. The left-hander, who also struck out 10 batters against the Atlanta Braves last Sept. 19, struck out at least one batter in every inning Wednesday and didn’t issue a walk.

Jeurys Familia allowed a pair of baserunners while recording one out in the seventh before Aaron Loup tossed 1 2/3 perfect innings. Edwin Diaz followed with a 1-2-3 ninth.

Wheeler settled down and allowed just one runner beyond first base between the second and sixth before he was chased in the seventh, when Lindor and Smith singled with one out. Sam Coonrod entered and gave up a sacrifice fly to Alonso.

James McCann hit his first Mets homer, a two-run shot, in the eighth. Smith, McCann and Nimmo had three hits apiece. Nimmo has reached base at least twice in each of the Mets’ first eight games.

Segura had two hits for the Phillies.

Wheeler (1-2), who spent seven seasons with the Mets before signing a five-year deal with the Phillies in December 2019, allowed the three runs on 10 hits and one walk while striking out six in 6 1/3 innings.