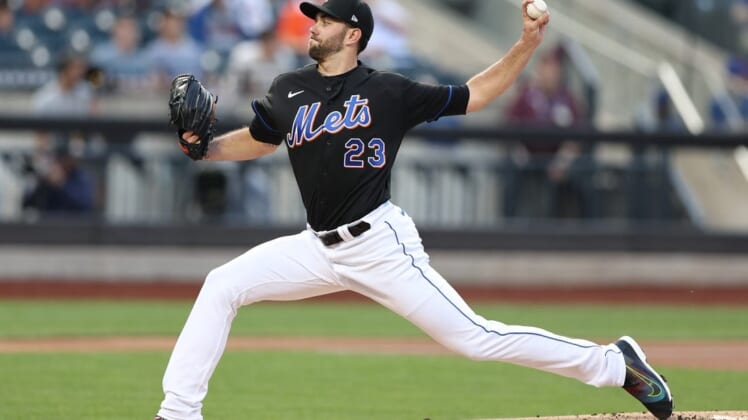 David Peterson was an expectant father when he turned in one the most effective starts of his young career on Friday.

The New York Mets left-hander is now a new dad, and his success in following up an impressive outing may determine if his club can dodge a rare series loss Wednesday night when it faces the host Cincinnati Reds.

Peterson (5-1, 3.24 ERA) will be activated from the paternity list after his wife delivered a newborn son. He is hoping his 35th career start goes as well at what unfolded Friday against the Texas Rangers. That night, Peterson took the place of Chris Bassitt, who landed on the COVID-19 injured list.

Peterson tied a career high with 10 strikeouts while allowing three runs and five hits with no walks in six innings during New York’s 4-3 win. The performance occurred after Peterson struck out a combined 15 in his previous two starts, both against the Miami Marlins.

“It’s what I expect out of myself,” he said. “I have the confidence that I can contribute. I can compete at a high level here for this team and help us win games.”

Peterson, who will face the Reds for the first time in his career, hopes to be equally as effective as Max Scherzer, who returned from an oblique injury and fanned 11 in six overpowering innings on Monday.

Scherzer, however, failed to earn a win. New York went 0-for-8 with runners in scoring position and wound up with a 1-0 loss when Seth Lugo allowed a sacrifice fly to Mike Moustakas in the ninth inning.

The Mets hope to avoid their sixth series loss of the year. They opened the set by collecting 12 hits and going 4-for-12 with runners in scoring position in a 7-4 win on Monday before getting blanked for the fourth time.

Cincinnati has 13 losses in its past 18 games and is seeking consecutive home wins for the first time since scoring a combined 21 runs against the Arizona Diamondbacks on June 6-7. The Reds were held to four hits on Tuesday but got 4 1/3 scoreless innings from their bullpen, which has a major-league-worst 5.57 ERA.

“Those (wins) are pretty fun,” Moustakas said in his on-field interview with Bally Sports Cincinnati. “We’ve been battling, playing pretty hard and tonight battled all the way against a great baseball team over there. We found a way to win at the end.”

After rookie Nick Lodolo pitched 4 2/3 effective innings in his return from a back injury, the Reds will turn to another first-year starter when Graham Ashcraft (4-2, 4.53 ERA) makes his ninth career start on Wednesday.

Ashcraft is hoping Wednesday is similar to his outing of June 24 and not like his outing on Thursday. He allowed two runs in eight innings of a 4-2 win at San Francisco but followed it up by allowing a career-worst seven runs in a career-low 2 1/3 innings during a 15-7 loss to the host Chicago Cubs.

Ashcraft is 3-1 with a 2.59 ERA in four home starts. He will be pitching in Cincinnati for the first time since getting tagged for six runs and eight hits in five-plus innings during a 7-3 loss to the Milwaukee Brewers on June 18.