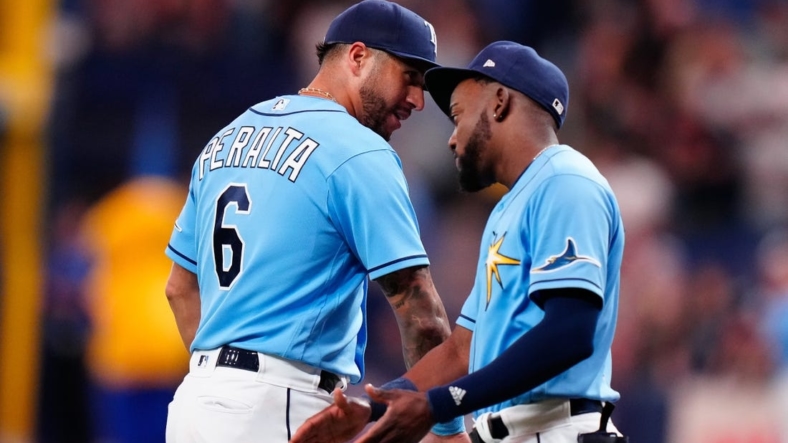 Tampa Bay Rays outfielder David Peralta is making his mark for his new team in a new league.

Due in part to Peralta’s assistance, the Rays captured the season series from the Boston Red Sox in the opener of a three-game series on Monday, and they will look for more on Tuesday night in St. Petersburg, Fla.

Peralta, 35, had spent his entire nine-year career with the National League’s Arizona Diamondbacks until Tampa Bay acquired him for minor league catcher Christian Cerda on July 30.

In 26 games for the Rays, he is hitting .284 with 10 RBIs. However, none of the run-producing hits were as key as Peralta’s RBI double in the a inning that plated Manuel Margot with the game-winning tally in the 4-3 win on Monday.

“It’s been tough for him,” Tampa Bay manager Kevin Cash said. “He’s learning a little bit of how the American League goes about attacking hitters. I do think there is an adjustment, and he’s right in the process of making it.”

Peralta’s hit was the result of an awkward swing that produced a grounder over first base, but it was good enough.

“That wasn’t the prettiest swing ever, but it did the job,” the Venezuelan-born outfielder admitted.

While the two AL East rivals already have a strong familiarity with one another — Tampa Bay holds a 10-4 season advantage and is 7-1 at home — an occurrence in the first game will hold true Tuesday as well.

For the second consecutive matchup, Boston manager Alex Cora will send out a pitcher who toiled as part of the Rays’ rotation in 2021, turning to Rich Hill a night after Michael Wacha tossed the opener.

Wacha was sharp but took a no-decision Monday. Cora hopes Hill matches Wacha’s outing, as the right-hander allowed just two runs in six innings, recorded his 1,000th career strikeout and left in line for a win against his old mates.

Cora said his team had chances while ahead 3-1 but couldn’t create more separation on the scoreboard.

“We had a lot of traffic,” Cora said. “We put pressure on them a few times but we weren’t able to cash in like they did. They put the ball in play in certain situations and they pitched well later on in the game, and that’s why they won.”

Five Tampa Bay pitchers struck out 13 batters as the Rays were victorious for the sixth time in their past seven outings.

On Tuesday, Hill (6-5, 4.52 ERA) will make his third start against the Rays this season. The left-hander beat them in Boston on Aug. 27 with seven shutout innings, allowing three hits and a walk while whiffing 11.

In his career against Tampa Bay, the soft-tossing curveball specialist is 3-0 with a 2.78 ERA over 14 appearances (five starts). The Rays have hit .220 against the 42-year-old southpaw.

Drew Rasmussen (9-4, 2.70 ERA) is due to start on Tuesday for Tampa Bay. He has made one start against Boston this season, at home on July 14, and he got a no-decision after surrendering three runs on four hits in six frames.

Across six career appearances (four starts) against the Red Sox, the right-hander is 1-0 with a 2.91 ERA and a .210 opponents’ batting average.