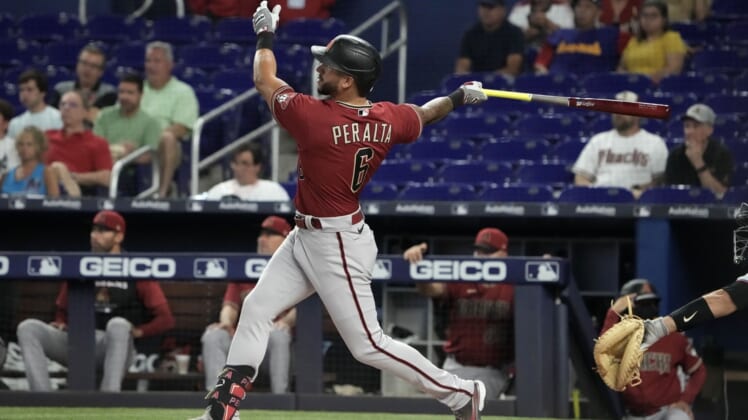 David Peralta went 3-for-4 with a homer and three RBIs, leading the Arizona Diamondbacks to a 5-4 win over the host Miami Marlins on Monday night.

Ex-Marlins pitcher Zac Gallen (1-0) earned the win in his first time facing his former team. Gallen, who entered the game with a 0.60 ERA, pitched six scoreless innings before running into trouble with two hit-by-pitches. He was removed from the game, both those runners scored, and his ERA is now 1.27.

Miami’s Pablo Lopez (3-1), who entered the game with the best ERA in the majors at 0.39, took the loss. He struck out seven in 4 2/3 innings, but he allowed six hits, two walks and four runs. Two of those runs scored on bloops.

Ian Kennedy pitched a scoreless ninth for his second save of the year.

Arizona opened the scoring with two runs in the first. Daulton Varsho doubled off the right-field wall. Two batters later, Peralta cleared the wall with his third homer of the year, a blast measured at 411 feet.

The Diamondbacks made it 4-0 in the fifth. With two outs and none on, Varsho drew a nine-pitch walk. He went to third on an error — Lopez’s wild pickoff attempt — and scored on Jordan Luplow’s single.

Luplow then stole second on a close play while Peralta swung and missed. Peralta’s backswing hit Marlins catcher Jacob Stallings’ glove, but no interference was called. Peralta then hit an RBI single, ending Lopez’s night. Both of those RBI singles were hit off the end of the bat.

Miami had two on and one out in the bottom of the fifth, but Stallings lined into a double play.

Arizona extended its lead to 5-0 on a double and two singles in the seventh. Geraldo Perdomo got the leadoff hit, Varsho doubled, and Luplow got the RBI single.

That became a bit more important in the bottom of the seventh as Miami loaded the bases with three straight hit-by-pitches. With two outs and a 2-2 count, Chisholm — after fouling three straight pitches — pulled a liner that one-hopped the wall in right, driving in two runs.

Jesus Aguilar then hit a two-run infield single that was fielded in the hole by shortstop Nick Ahmed, who threw late to first. Chisholm took advantage and scored all the way from second to cut Miami’s deficit to 5-4.

In the bottom of the ninth, with two on, Jon Berti made the final out with a high pop to first baseman Christian Walker.