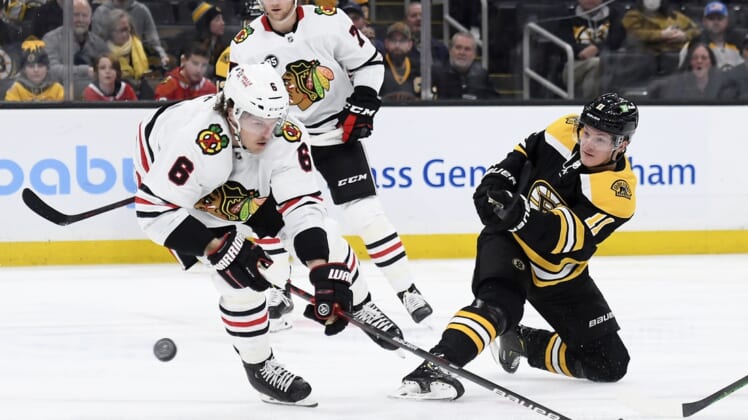 David Pastrnak’s second goal and third point of the game with 17.2 seconds left in regulation lifted the Boston Bruins to a 4-3 win over the visiting Chicago Blackhawks on Thursday.

Taylor Hall slid the puck from the corner through traffic to set up Pastrnak in the slot for the game-winner. It was the team-leading 33rd goal of the season for Boston’s leading scorer.

The Bruins also got goals from Charlie Coyle and Jack Ahcan as they improved to 8-1-1 in their past 10 games. The second-period tally was the first of Ahcan’s NHL career in his eighth game.

In just his third start since returning from injury, Kevin Lankinen made 32 saves for the Blackhawks. Eighteen came in the third period. Chicago lost for the third time in four games.

After Chicago logged the first four shots thanks in part to an early power play, the second Boston shot resulted in a goal 4:12 into the opening period. Coyle followed up Connor Clifton’s drive to the net for a shot, burying a long rebound from the left circle.

DeBrincat tied the game with his team-high 34th goal at 6:41 of the first, finishing Patrick Kane’s cross-ice feed on a four-on-one rush.

The visitors tipped the score in their favor at 2-1. Hagel took advantage of a neutral-zone turnover and scored a backhanded wraparound 4:12 into the second.

Ahcan made a great individual play for his milestone goal to tie the score at 11:57 of the second. On a power play, he forced a turnover and fired home a wrister past Lankinen from the slot.

At 15:23 of the middle frame, Boston connected for a go-ahead goal on a power play with Pastrnak burying Charlie McAvoy’s one-time feed.

Chicago leveled the score at 3-3 at 3:24 of the third. Hagel cleaned up a loose rebound at the top of Swayman’s crease following DeBrincat’s initial shot.