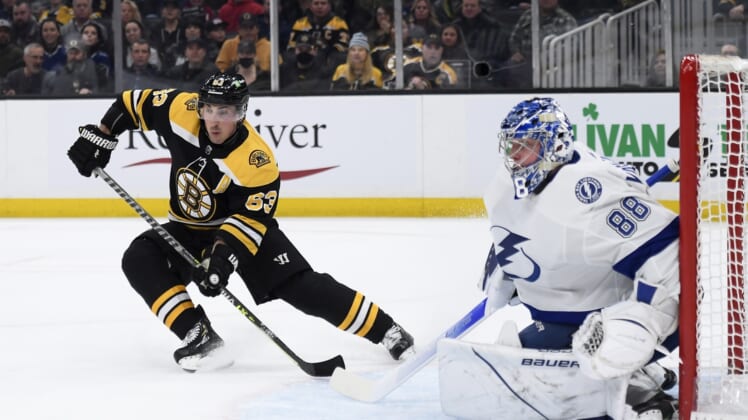 David Pastrnak recorded all of the Boston Bruins’ offense in the form of his 14th career NHL hat trick, lifting the Boston Bruins to a 3-2 win over the visiting Tampa Bay Lightning on Thursday night.

Pastrnak scored twice in the third period, netting the game-winner off an assist from Taylor Hall at the net front with 4:10 to play.

Erik Haula chipped in on all of Pastrnak’s goals to finish the first three-assist game of his career. It was his second straight multi-assist effort in as many games and third in March.

Boston’s Jeremy Swayman made nine of his 22 saves in the third period, moving to 10-1-1 in his last 12 starts.

Boston moved ahead of Tampa and into third place in the Atlantic Division standings with its 13th win in 16 games (13-2-1).

Recent acquisition Brandon Hagel and captain Steven Stamkos scored goals and Andrei Vasilevskiy made 36 saves for the Lightning, who have lost three straight games and six of their last eight.

The Lightning killed off four penalties over the first two periods and tallied the first goal shorthanded. At 7:11 of the middle frame, Hagel ripped home a one-timer off Ondrej Palat’s feed from the corner.

Despite the unsuccessful power plays, Boston had a 29-14 shots advantage through 40 minutes.

The hosts leveled the score not even three minutes after Hagel’s opening goal. Pastrnak buried a backhand shot after taking a stretch feed from Haula and moving around his defender.

Hampus Lindholm won the puck battle behind Swayman’s net and earned his first point as a Bruin on the opening goal.

Stamkos capitalized on a loose rebound in the slot to give Tampa the lead back at 3:51 of the third. After starting the play at the blue line, Stamkos moved toward the net front and scored on a quick shot from the edge of Swayman’s left-hand circle.

Pastrnak made it 2-2 at the 8:17 mark, sneaking a backhand past Vasilevskiy from a difficult angle right outside the cage.