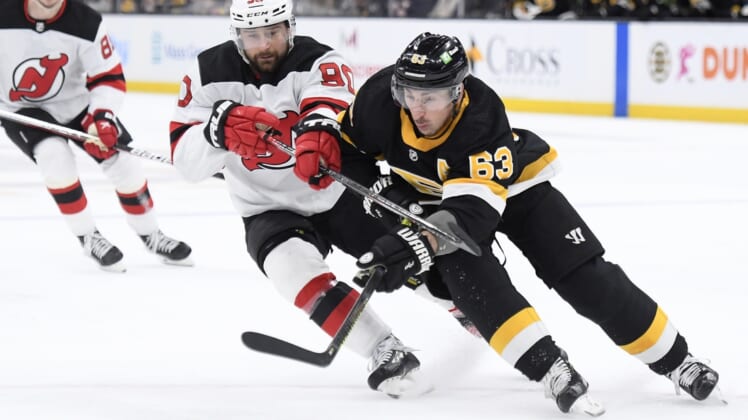 David Pastrnak scored the go-ahead goal with 5:49 remaining in the third period to lead the Boston Bruins past the visiting New Jersey Devils in a 5-3 win on Tuesday night.

It was the first goal since Nov. 30 to end a nine-game scoring drought for Pastrnak, who finished off his own point-blank rebound into the upper left corner to make it 4-3.

Brandon Carlo scored with 22.8 seconds left and Curtis Lazar, Oskar Steen and Trent Frederic also scored for the Bruins. Linus Ullmark made 23 saves for Boston, which earned its third straight victory coming out of the NHL’s COVID-19 schedule pause.

Nathan Bastian, Tomas Tatar and Damon Severson each had a goal for the Devils. Mackenzie Blackwood stopped 29 of 34 shots for New Jersey, which had won three straight coming out of the break.

Lazar opened the scoring 2:53 into the first period to give the Bruins a 1-0 lead.

Bastian tied the game at 1-1 for New Jersey only 57 seconds into the second after poking the puck out of the Bruins’ zone and converting on a breakaway with a wrist shot in the slot.

Steen’s first NHL goal exactly 20 seconds later restored a lead for Boston at 2-1. The 23-year-old forward knocked free a puck that had settled on top of the net, and it bounced in off of Blackwood’s mask.

Tatar capped the early-period fleury with another goal at 3:05 of the second to re-tie it at 2-2. Frederic’s second goal in as many games made it 3-2 for Boston at 9:42 of the middle period.

Severson once again knotted the score at 3-3 for New Jersey at 7:36 of the third, making a well-timed exit from the penalty box for a breakaway before hesitating and flicking the puck around Ullmark.

Former Bruins defenseman Dougie Hamilton missed the game for New Jersey after suffering a broken jaw on Sunday against Washington. Devils captain Nico Hischier (lower body) did not play after notching a pair of goals against the Capitals.