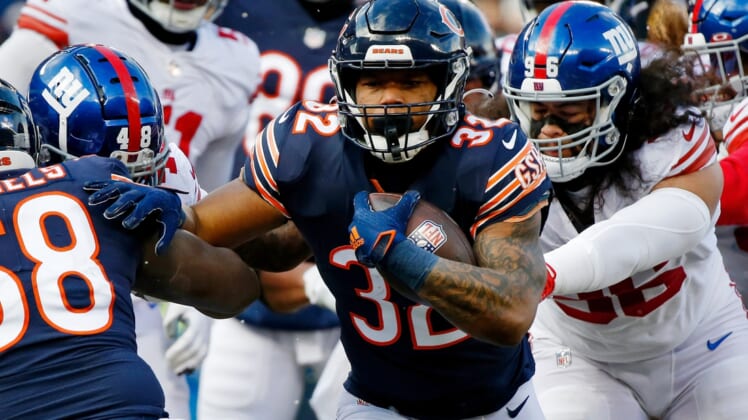 Jan 2, 2022; Chicago, Illinois, USA; Chicago Bears running back David Montgomery (32) runs with the ball for a touchdown against the New York Giants during the first half at Soldier Field. Mandatory Credit: Jon Durr-USA TODAY Sports

Montgomery scored a pair of 2-yard TDs and finished with 64 yards on 22 carries as the Bears (6-10) won their second straight game.

Andy Dalton returned from a groin injury and made his sixth start as rookie Justin Fields was inactive for the second straight game with an ankle injury. He completed 18 of 35 passes for 173 yards and threw a 4-yard TD to Darnell Mooney as Chicago held a 14-0 lead less than seven minutes in.

Montgomery’s first TD occurred after linebacker Trevis Gipson forced a fumble that was recovered by defensive end Bilal Nichols on the first play of the game. Mooney’s TD was set up by safety Tashaun Gipson Sr.’s 31-yard interception return of a pass intended for Kenny Golladay.

Cairo Santos made field goals of 21 and 44 yards, and the Bears also scored on a safety.

Robert Quinn recorded his 18th sack in the fourth quarter, breaking the team record of 17 1/2 sacks by Richard Dent in 1984, a year before he was the MVP of Chicago’s Super Bowl win over New England.

Former Bear Mike Glennon started for the Giants but hardly threw the ball. He completed four of 11 for 24 yards and was intercepted twice as New York (4-12) lost its fifth straight and dropped its seventh straight road game with owner John Mara in attendance.

Saquon Barkley, who tore his ACL in Chicago during Week 2 last season, rushed for a season-high 102 yards on 21 carries.

New York’s only points came on a 38-yard field goal by Graham Gano with 7:45 remaining in the first half. The Giants were held to 10 points or less for the third straight game.

After Gano’s field goal, Chicago scored three times in the final 61 seconds before halftime. Santos’ field goals were sandwiched around a safety that occurred when Angelo Blackson tackled running back Devontae Booker in the end zone with 52 seconds left.