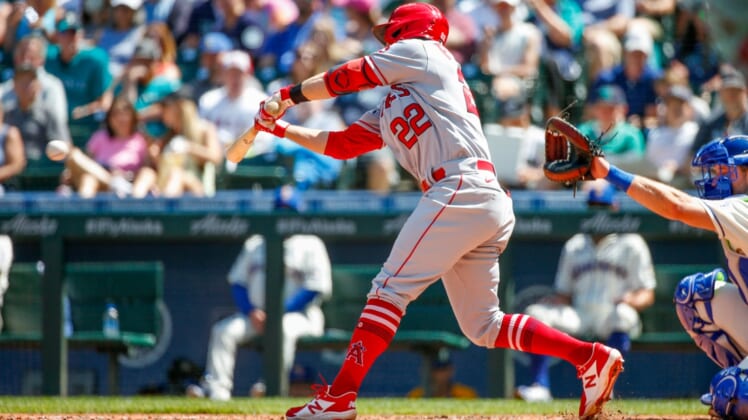 David Fletcher went 4-for-5 with a home run and four RBIs as the Los Angeles Angels defeated the host Seattle Mariners 7-1 Sunday afternoon.

Left-hander Jose Suarez (4-2) and three relievers combined on a four-hitter as the Angels salvaged the finale of the three-game series. Suarez allowed one unearned run on three hits in five innings, with two walks and four strikeouts. Right-hander Raisel Iglesias pitched 1 1/3 innings for his 19th save.

Fletcher hit a solo homer with two outs in the top of the third off Mariners left-hander Hector Santiago to tie the score at 1 and extend his hitting streak to 24 games, the third-longest in franchise history.

The Mariners brought on Ramirez in the fifth, and he hit Taylor Ward with a pitch and then walked Juan Lagares. Following a sacrifice bunt by Jack Mayfield to advance the runners to second and third, Fletcher grounded a two-run single into right field to break the tie.

In the seventh, Lagares led off with a ground-rule double to right-center field and Fletcher lined a one-out single to center off Keynan Middleton to make it 4-1.

The Angels tacked on three runs in the ninth off Rafael Montero. Fletcher led off with an infield single and Shohei Ohtani walked. Jared Walsh then lined a run-scoring single to right.

Jose Iglesias lined a single to center to load the bases and Phil Gosselin hit a sacrifice fly. A passed ball by Mariners catcher Cal Raleigh, who was making his major league debut, brought home the final run.

The Mariners scored an unearned run in the first. J.P. Crawford led off by grounding a single into center field and Mitch Haniger then lined a single to right. A passed ball by Kurt Suzuki allowed both runners to move up, and Crawford scored on Ty France’s sacrifice fly to center.

The only other hits the Mariners managed were a leadoff single by Jake Fraley in the fourth inning and a two-out single in the eighth by Luis Torrens.