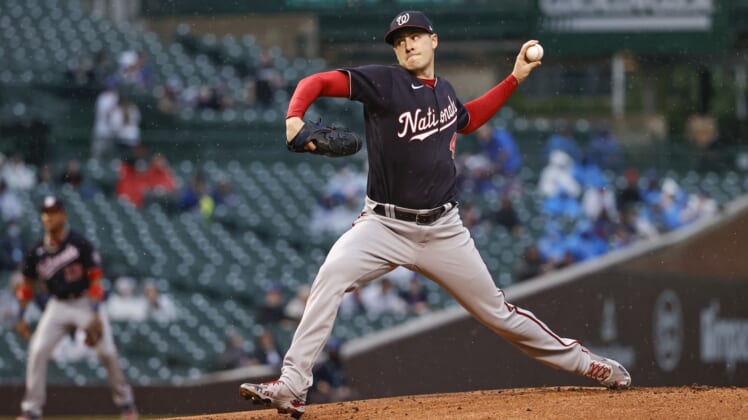 David Bote hit a go-ahead, two-run homer in the sixth inning, and the Chicago Cubs held on for a 6-3 win over the visiting Washington Nationals on Tuesday night.

Ian Happ also homered for the Cubs, who have won three games in a row and four of their past five. Willson Contreras went 2-for-5 with two RBIs.

Starlin Castro homered for the Nationals, who have dropped three of four. Trea Turner and Ryan Zimmerman drove in one run apiece.

Nationals right-hander Will Harris (0-1) allowed two runs in two-thirds of an innings to take the loss. He relieved Patrick Corbin, who yielded three runs on eight hits in five innings.

Chicago’s Craig Kimbrel pitched a scoreless ninth inning to pick up his eighth save.

The Cubs jumped to a 2-0 lead in the third. Bote and Nico Hoerner reached on back-to-back infield singles, and Contreras drove in both of them with a single to shallow right field.

In the top of the fifth, the Nationals evened the score at 2-2. Turner ripped a line drive for a run-scoring single, increasing his team-leading total to 22 RBIs. Zimmerman followed two batters later with an RBI single.

Chicago regained the lead in the bottom of the fifth when Hoerner scored on an infield single by Kris Bryant.

Washington pulled even once again in the sixth. Leading off, Castro belted a changeup over the middle of the plate an estimated 433 feet to right-center field for his second homer of the season.

Bote unlocked the tie with a two-run shot in the bottom of the frame to put the Cubs back on top 5-3. His one-out shot to straightaway center traveled an estimated 407 feet and also scored Matt Duffy, who was on base after a leadoff walk.

In the eighth, Happ hit a solo shot into the basket atop the wall in left-center field to increase Chicago’s advantage to 6-3. It was his fourth homer of the season and his second in the past three games.

Cubs first baseman Anthony Rizzo left the game after four innings because of lower back tightness. The team termed the move a precautionary measure.