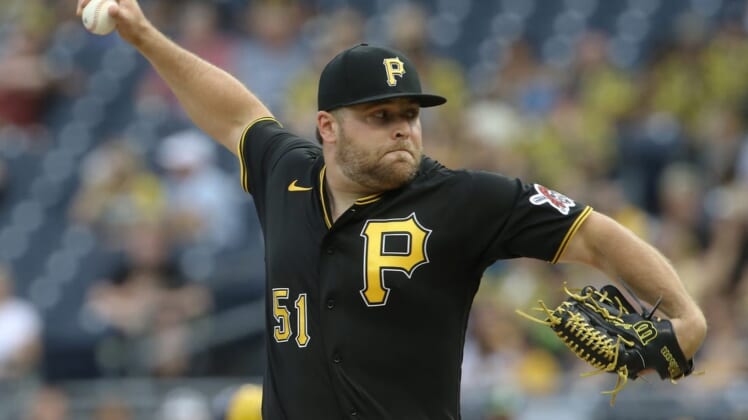 David Bednar has quietly emerged as one of the majors’ most dependable closers in his second season with the Pittsburgh Pirates, who will begin a four-game series against the host Miami Marlins on Monday.

The 27-year-old was selected to his first All-Star Game after converting 15 of his 18 save opportunities this season, with five of those covering multiple innings.

“I don’t have words for it,” Bednar said. “It’s unbelievable. It takes me to some of the guys who have done it before, guys I grew up watching. To be a part of that group is really, really special.”

Pittsburgh enters on a roll after winning two of three from the Milwaukee Brewers over the weekend, while Miami split a four-game set with the New York Mets.

The surprising Marlins are 41-43 and within four games of the National League’s final wild-card spot.

Reserve outfielder Billy Hamilton has given the Marlins a spark in seven games since joining the team on July 1. The speedster has served as a reserve outfielder with three stolen bases and four runs.

“He puts pressure on the defense,” Marlins manager Don Mattingly said. “We’re gonna be able to keep using him that way.”

Miami left-hander Trevor Rogers (4-7, 5.57 ERA) will take the mound in the series opener. After finishing second in last year’s NL Rookie of the Year voting, he has completed six innings only once in 16 starts this season.

Rogers, 24, yielded three runs over 4 2/3 innings in a 5-2 loss to the Los Angeles Angels last Wednesday.

Mattingly was encouraged by the outing after Rogers allowed four hits and struck out five.

“Thought he was good tonight, three in a row really that he’s been pretty good,” Mattingly said. “He has had an inning where he gets into a little trouble. There’s going to be things he has to get through, but really he’s getting pretty consistent with the way he’s throwing the ball.”

Pittsburgh, which has not announced a starter for Monday, will be monitoring the status of Bryan Reynolds after the center fielder exited Sunday’s game with discomfort on his right side.

Alcantara allowed six hits in seven shutout innings on Sunday to lower his ERA to 1.73.

Chisholm leads NL second basemen in homers (14) and RBIs (45). He is rehabbing from a right lower back strain that has kept him sidelined since June 29, but said that he hopes to return by the All-Star Game.

The Marlins are facing a Pirates team that is in the midst of a 12-game, 11-day, four-city road trip. Eleven of Pittsburgh’s last 12 road games have been decided by one or two runs, including Sunday’s 8-6 win over Milwaukee.