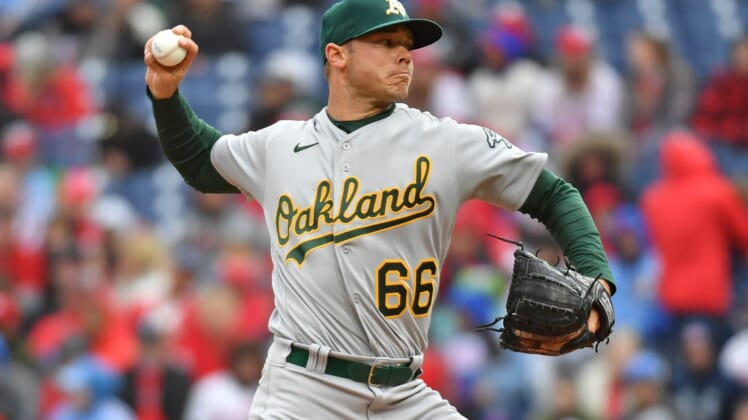 Daulton Jefferies allowed two hits over five strong innings, Tony Kemp had three hits and two RBIs and the visiting Oakland Athletics avoided being swept in their season-opening series, winning 4-1 over the Philadelphia Phillies on Sunday.

Making just his third career start and seventh major league appearance over three seasons, Jefferies yielded singles to Johan Camargo and Garrett Stubbs. In addition to giving up a pair of walks, the right-hander struck out two batters while throwing 48 pitches against a potent Phillies’ offense that totaled 13 runs in winning the first two games of this set.

Kemp, who had one hit in the first two contests, recorded three singles, the last of which scored two in the ninth inning. Cristian Pache had two hits and Billy McKinney homered for the A’s, who also got a combined three no-hit innings from relievers Sam Moll, Domingo Acevedo and Kirby Snead.

The Phillies’ only other hit came courtesy of Jean Segura’s homer off Lou Trivino to lead off the ninth inning. Fellow Philadelphia stars Kyle Schwarber, Bryce Harper and Nick Castellanos went a combined 0-for-12 with four strikeouts on the day.

Philadelphia starter Zach Eflin allowed two hits, walked two and struck out three while throwing 68 pitches over four scoreless innings. The A’s loaded the bases against Eflin with no outs in the third, but Elvis Andrus lined into a 1-4 double play, then Sean Murphy popped out to first baseman Rhys Hoskins to waste that golden opportunity.

However, Andrus would help give Oakland its first lead of 2022 in the sixth, when he doubled with one out in the frame. He would eventually score on Seth Brown’s single to left field for his fourth RBI of the series.

Oakland went up 2-0 on McKinney’s solo homer into the right-field stands to lead off the seventh. Kemp concluded his big offensive day with a liner to center field that scored two and extended the visitors’ lead to 4-0.