Philadelphia 76ers front office head Daryl Morey is once again in trouble with the NBA league office over a social media post.

Mere months after being fined $50,000 for tampering with then-Houston Rockets guard James Harden via Twitter, Morey is hearing from the powers that be once again.

According to a press release from the NBA, Morey has been fined $75,000 for tampering with Golden State Warriors guard Stephen Curry on the same platform last week. The 76ers’ organization has also been fined $75,000.

“The NBA announced today it has fined Philadelphia 76ers President of Basketball Operations Daryl Morey $75,000 for violating the league’s anti-tampering rule,” the release read. “The fine is in response to a social media post Morey made June 3 regarding the Golden State Warriors’ Stephen Curry. The 76ers were also fined $75,000 for Morey’s conduct.

How exactly did Daryl Morey tamper with Stephen Curry?

Following Philadelphia’s Game 5 win over the Washington Wizards in the first round of the NBA Playoffs last Wednesday, Morey responded to a post from Stephen Curry congratulating his younger brother, Seth, for his performance in the series-clinching win. In said post, Daryl Morey simply wrote “join ’em.”

While the former Houston Rockets general manager attempted to backtrack a few minutes later, it became clear to observers that he did in fact tamper with Curry. 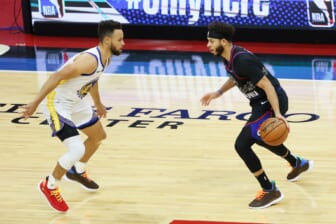 All of this seems to be moot from a practical standpoint. Stephen Curry is under contract with the Warriors through next season. There’s every reason to believe that the two sides will come to terms on a contract extension during the summer.

That didn’t stop Morey from shooting his shot on social media. He’s now $75,000 lighter in his checking account while the 76ers find themselves out another $75,000.