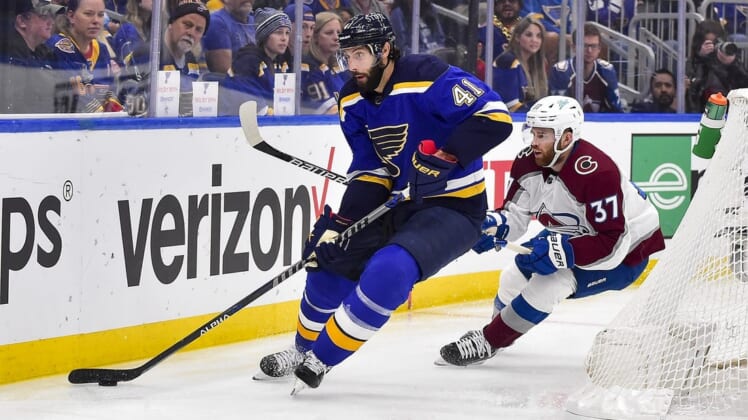 Helm’s slap shot from the top of the left circle gave the Avalanche a 4-2 victory in the best-of-seven series. Colorado moves on to face the Edmonton Oilers in the Western Conference finals in its first trip to the NHL’s final four since 2002.

The goal was Helm’s first in 10 playoff games this year and just his eighth in 69 career postseason games.

J.T. Compher scored twice for the Avalanche, and Darcy Kuemper made 18 saves for the win.

Colorado outshot St. Louis 39-20. The Avalanche pinned the Blues in their own zone during the first period and maintained heavy pressure. Mikko Rantanen had a point-bank opportunity on his backhand, but Husso denied him.

Nazem Kadri got in free on a two-on-one break, but he missed his shot.

A power play late in the opening period helped the Blues find an offensive flow. They didn’t convert, but they gained momentum and took a 1-0 lead with one minute left in the period.

Robert Thomas passed to Faulk coming down the middle. Faulk shot from the slot as Vladimir Tarasenko created a screen on Kuemper.

Colorado tied the 1-1 game 5:19 into the second period after Manson doubled back from the left corner. His shot rebounded to Compher in front of the net for the easy conversion.

The Blues countered with a two-on-one rush to take a 2-1 lead at 9:34 of the middle period. Brayden Schenn pushed the pick up the right wing and set up Kyrou’s goal from the center edge of the left circle.

The Blues had multiple chances to add on, but Alexei Toropchenko hit the post, Manson slid into the crease to stop Kyrou’s shot with Kuemper out of the net, and then Kyrou misfired on a breakaway.

Those missed opportunities stung when the Avalanche tied the game 2-2 on Compher’s power-play goal off the right wing at 10:18 of the third period. That set the stage for Helm’s last-minute heroics.