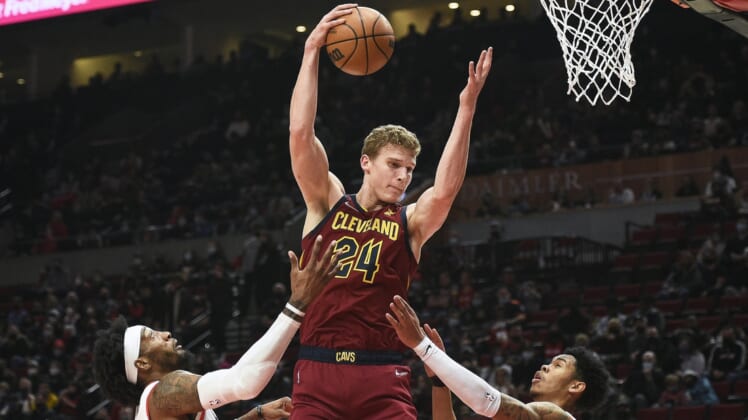 Darius Garland recorded 26 points and made five 3-pointers to help the Cleveland Cavaliers post a 114-101 victory over the host Portland Trail Blazers on Friday night.

Evan Mobley registered 18 points and eight rebounds and Lauri Markkanen had 15 points as Cleveland won for just the second time in its last six games.

Cedi Osman scored 12 of his 14 points in the fourth quarter and Jarrett Allen contributed 13 points and 13 rebounds for Cleveland. Rajon Rondo had 11 points in 17 minutes in his team debut as the Cavaliers snapped their string of seven straight losses in Portland.

Norman Powell scored 19 points and Robert Covington added 17 points and eight rebounds for the Trail Blazers, who have lost six of their past seven games and 16 of their last 20.

Osman made four 3-pointers in the fourth quarter as the Cavaliers outscored the Trail Blazers 32-23.

Mobley’s dunk boosted Cleveland’s lead to 101-90 with 3:52 to play. Powell and Nassir Little answered with 3-pointers to bring Portland within five but the Cavaliers rattled off the next eight points.

Osman buried a 3-pointer, Mobley slammed home a dunk and Garland stole the ball and scored on a layup to give Cleveland a 108-96 lead with 2:08 remaining. Simons was called for a technical foul and Garland hit it to make it a 13-point advantage.

Garland knocked down a 3-pointer with 1:21 left to again make it a 13-point margin as the Cavaliers closed it out.

Garland had 16 first-half points to help the Cavaliers possess a 57-47 lead at the break.

Cleveland held a 79-68 lead after Kevin Love connected on a 3-pointer with 3:04 left in the third quarter. Portland ran off the next eight points to move within three before the Cavaliers took an 82-78 lead into the final stanza.