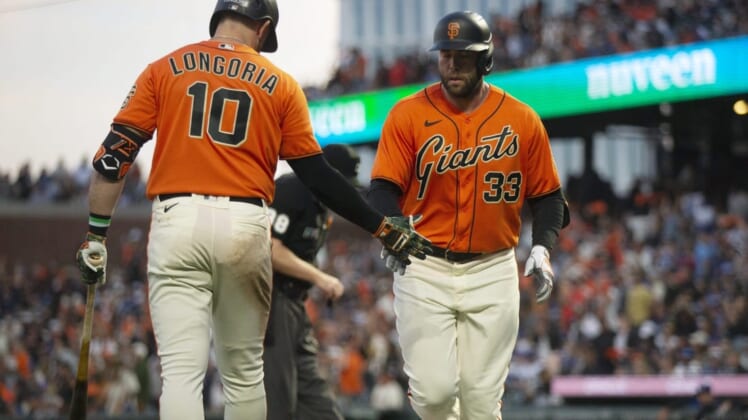 Darin Ruf homered twice and added an RBI single as the San Francisco Giants opened a three-game series against the visiting Los Angeles Dodgers with a 7-2 victory on Friday.

The Dodgers loss was compounded by the fact that starter Walker Buehler (6-3) exited after four innings due to right elbow discomfort. Buehler allowed three runs on four hits with no walks and six strikeouts while throwing 70 pitches.

Gavin Lux homered for the Dodgers, who were held to six hits and lost for the fourth time in their past six games.

San Francisco starter Jakob Junis (4-1) yielded two runs on five hits over five-plus innings. He walked one and struck out five before exiting with a left hamstring strain after throwing one pitch in the sixth inning.

Los Angeles took an early lead in the second when Chris Taylor’s one-out double scored Justin Turner, who doubled to lead off the inning.

The Giants answered in the bottom of the second with two runs against Buehler. Pederson led off with a single, stole second base and scored on Evan Longoria’s one-out double. Brandon Crawford followed with an RBI single to put the Giants ahead.

Buehler recorded five consecutive strikeouts before Ruf blasted a solo homer to left field with one out in the fourth.

The Dodgers pulled within 3-2 in the top of the fifth when Lux hit a leadoff homer to center field. The 412-foot blast was his first long ball since April 13.

Justin Bruihl replaced Buehler in the bottom of the fifth and immediately ran into trouble, allowing three runs on four hits and a walk in the frame.

The Giants loaded the bases with two outs after Bruihl intentionally walked Wilmer Flores to face Pederson, who delivered a two-run single against his former team. Ruf followed with an RBI single, scoring Flores from third.

Ruf recorded his second multi-homer game of the season with a solo homer in the eighth against David Price.

Longoria exited the game following the fourth inning due to left hamstring tightness after grounding out.