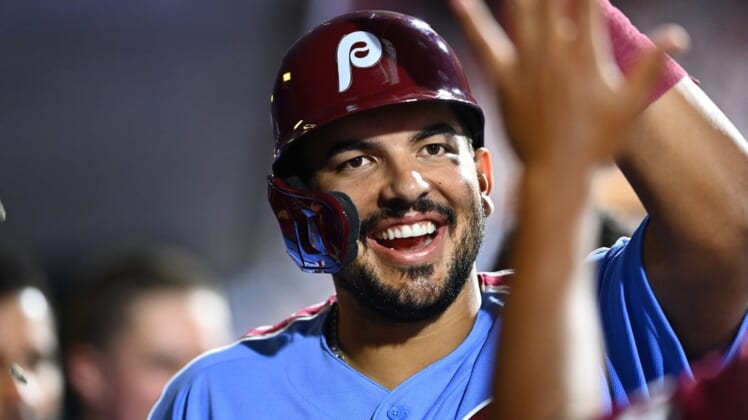 The Philadelphia Phillies will look to open July the way they closed June.

With an offensive outburst.

Philadelphia will hope to maintain its momentum when it hosts the St. Louis Cardinals on Friday in the opener of a three-game series.

The Phillies ripped five home runs, including the first two of rookie Darick Hall’s career, as they pounded the Atlanta Braves 14-4 on Thursday. The blowout capped a 19-8 month for Philadelphia.

Kyle Schwarber, Nick Castellanos and Rhys Hoskins also homered for the short-handed Phillies, who are playing without injured players such as Bryce Harper and Jean Segura.

Hall said on a postgame interview on NBC Sports Philadelphia, “I’d be lying if I said I couldn’t smile. I was overjoyed.”

Hall hit 20 home runs for Triple-A Lehigh Valley before having his contract selected in time for Wednesday’s game.

“I’m just overjoyed with everything right now,” he said.

Every player in the Philadelphia starting lineup produced at least one hit on Thursday. The Phillies accumulated 13 hits in all, which was a major boost following a listless effort in a 4-1 loss to the Braves on Wednesday.

“Guys gotta chip in and step up, and they did that,” interim manager Rob Thomson said.

Especially prized free agent acquisition Castellanos, whose 2-for-4 effort was highlighted by a three-run home run.

With Zach Eflin sidelined due to a knee injury, Bailey Falter (0-2, 4.50 ERA) is scheduled to start for the Phillies on Friday. Falter has never faced the Cardinals in his brief career.

The Cardinals will look to rebound following a maddening 4-3 loss to the visiting Miami Marlins on Wednesday, a result that kept St. Louis from sweeping the three-game series.

Cardinals reliever Ryan Helsley served up a two-run home run to Avisail Garcia with two outs in the ninth inning.

“That’s baseball right there,” Helsley said. “You know, you can make the best pitch and give up a hit and make the worst pitch and get an out, so just try to learn from it and move on and try to start another streak.”

Garcia’s homer was the first that Helsley has given up in 25 appearances and 30 2/3 innings this season.

Edmundo Sosa provided an unexpected spark for the Cardinals with two hits and two runs against Marlins ace Sandy Alcantara. Sosa has produced hits in consecutive games. Before Tuesday, he hadn’t collected a hit since June 4 as he endured an 0-for-16 slump.

“He took some really good at-bats,” Cardinals manager Oliver Marmol said. “He continues to just bring energy and life whether he’s in the lineup or not. But that’s a tough role to not play for as long as he did, take the at-bats he did (on Tuesday) and do the same thing against Sandy. That’s impressive.”

The Cardinals are hopeful that Nolan Gorman will return to the lineup Friday. The second baseman missed the past two games due to a bruised left hand.

“He’s gonna continue to get treatment on it and then maybe try to take some swings (on Friday), see how that feels,” Marmol said.

Over his past four starts, Mikolas has pitched to a 1.55 ERA, but he was 1-2 in those outings due to a lack of offensive support.