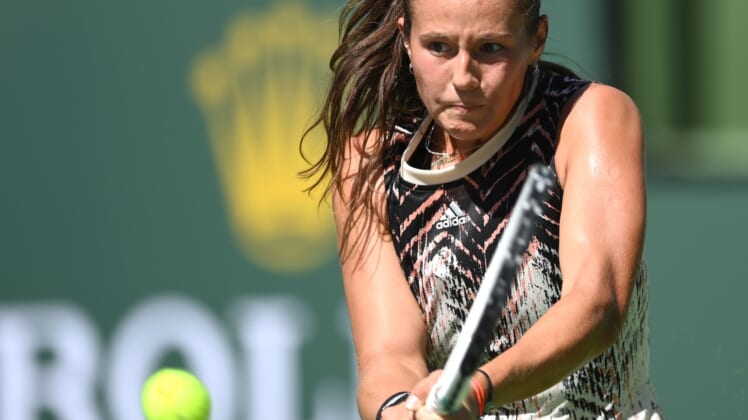 Daria Kasatkina reached the quarterfinals of the Internazionali BNL d’Italia for the first time by recording a 6-4, 6-4 victory over second-seeded Paula Badosa of Spain on Thursday night in Rome.

Kasatkina had cracked the Round of 16 four previous times without success before delivering the breakthrough victory against Badosa in one hour, 46 minutes.

“I feel like my level is growing with every match,” Kasatkina said after the triumph. “I’m pretty happy with my level today, and I hope I’m going to be the same or better tomorrow.”

The Russian won 71.9 percent of the points on Badosa’s second serve.

Kasatkina will face Jil Teichmann in the quarterfinals after the Switzerland native posted a 6-7 (3), 6-3, 7-5 victory over Elena Rybakina of Kazakhstan.

“Jil, now she’s in great condition, she just played the semis in Madrid,” Kasatkina said. “She already beat very good players. She’s lefty, it’s clay, so yes, it’s going to be a good match. … We’re the same age, we know each other pretty well, so I think it’s going to be fun.”

Meanwhile, top-seeded Iga Swiatek increased her winning streak to 25 matches with a 6-4, 6-1 victory over No. 16 seed Victoria Azarenka of Belarus.

Swiatek battled consistency issues — she had 34 winners but 39 unforced errors — in the 79-minute victory.

“I didn’t start well, and everybody could see that,” Swiatek said afterward. “I’m really happy with the way I reacted and how I improved in the first set. Also how different the second set looked to the first one because I could really reset and really change the way I played. That’s the most positive thing for me.”

Azarenka has 18 winners and 31 unforced errors.

The 2019 U.S. Open champion said she is eager for her first career match against Swiatek.

“She’s playing great tennis,” Andreescu said of Swiatek. “I really admire her success. I’m very excited to play her. I love the challenge.”

Third-seeded Aryna Sabalenka of Belarus reached the quarterfinals with a 6-1, 6-4 victory over 13th-seeded American Jessica Pegula.

Sabalenka will face Amanda Anisimova, who excelled during a 6-2, 6-2 victory over seventh-seeded Danielle Collins in an All-American affair. Anisimova is 4-0 all-time against Sabalenka, including two clay-court wins this season.

Sakkari will next face ninth-seeded Ons Jabeur, who increased her winning streak to nine with a 6-3, 6-2 triumph over Yulia Putintseva of Kazakhstan in 61 minutes.