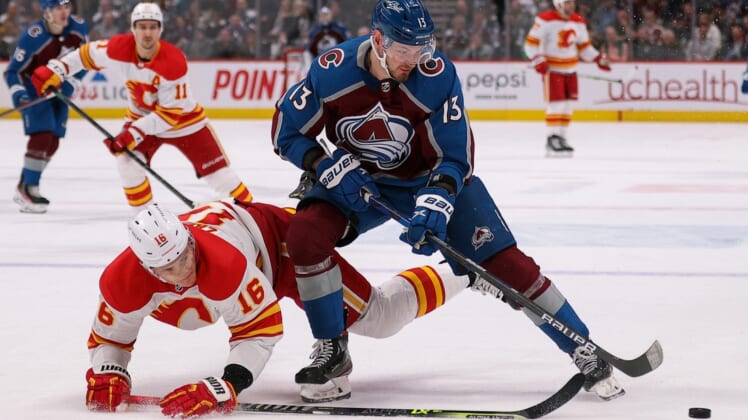 Mikko Rantanen had a goal and an assist to back Kuemper’s fourth shutout of the season and the 24th of his career. He has three shutouts in nine career games against the Flames.

Dan Vladar stopped 29 shots for Calgary, which had its two-game winning streak stopped.

Colorado played its first game without captain Gabriel Landeskog, who is expected to miss several weeks with a knee injury. He is scheduled to undergo surgery on Monday.

The Avalanche took a 1-0 lead with Nikita Zadorov off for hooking. Colorado worked the puck into the Flames’ zone and Rantanen sent a pass to MacKinnon at the top of the left circle. MacKinnon skated into the circle and put a wrister that went off Vladar and inside the post at 9:55 of the first period.

The Avalanche had a couple of prime chances in the second period, but Vladar came up big again. He made a pad save on a shot by Erik Johnson and later in the frame he denied MacKinnon with a save on an odd-man rush to keep it 1-0.

Colorado nearly scored again on the next power play, but Alex Newhook’s shot went off the right post and then the left post but not in.

Calgary had a chance to tie it on the power play late in the second period and into the third, but Kuemper kept them off the scoreboard.

MacKinnon struck again a few minutes after the penalty kill. Rantanen won a faceoff in the Calgary end, and MacKinnon picked the puck out of a scrum in the circle and unleashed a snap shot to the short side that beat Vladar at 4:00.

It was his 21st goal of the season and his third multi-goal game of the year.

Vladar came off for an extra skater with 2:30 remaining and Rantanen scored into the empty net at 18:22. It was his 28th goal of the season.