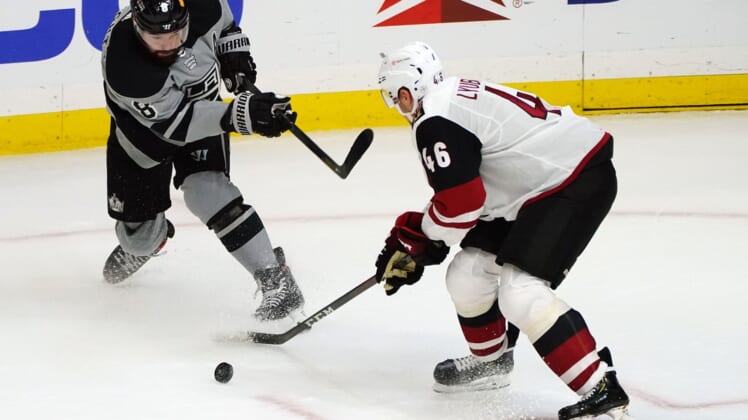 John Hayden’s first goal of the season held up as the winner and goaltender Darcy Kuemper collected the shutout to lead the visiting Arizona Coyotes to a 4-0 victory over the Los Angeles Kings on Saturday.

Lawson Crouse, Jakob Chychrun and Phil Kessel also scored, while Alex Goligoski collected two assists for the Coyotes (21-22-5, 47 points), who snapped a two-game losing skid and moved one point ahead of the St. Louis Blues in the chase for fourth place in the West Division.

The top four teams advance to the Stanley Cup playoffs, and three spots are already claimed by the Vegas Golden Knights, Colorado Avalanche and Minnesota Wild. Arizona has eight games remaining in the regular season, while the Blues have 11.

Kuemper made 26 saves to earn his second shutout of the season and 20th of his career.

Calvin Petersen stopped 36 shots for the Kings (17-22-6, 40 points), whose slim playoff hopes took a hit. Los Angeles has lost four of its last five games and is seven points behind the Coyotes with 11 games remaining in the regular season.

Hayden snapped a 23-game goal drought just beyond the midway point of the opening period. He cruised to the slot for a pass from Derick Brassard and buried his first goal since March 7, 2020. Brassard’s assist was the 500th point of his career.

Crouse then doubled the lead 36 seconds into the second period. The hulking forward was parked in the slot when he deflected Goligoski’s high point shot to net his fourth goal of the season.

After the hosts managed some sustained pressure late in the second period and early in the third period, their comeback hopes were quashed by Chychrun’s power-play goal — a rocket of a shot from the top of the left circle — at 4:19 of the third period. Chychrun’s career-high 14th goal of the season leads all NHL defensemen.

Kessel rounded out the scoring with a top-corner shot from the right circle for his team-high 17th goal of the season with seven minutes remaining to cap a two-point game.

From there, the Coyotes’ quest was to preserve the shutout, which they did by holding the Kings to only four shots on goal after it became a 4-0 affair.