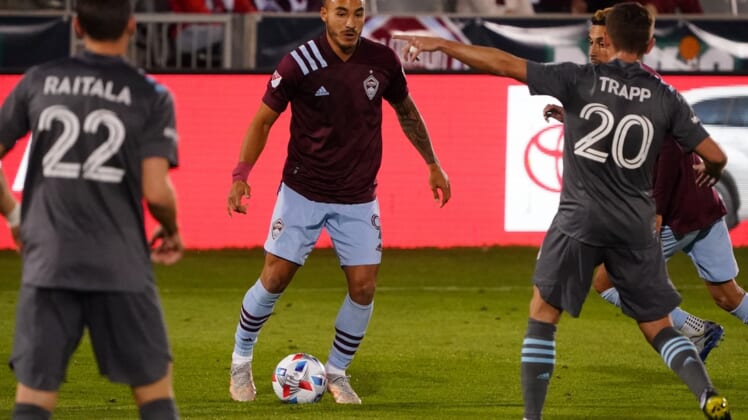 Danny Wilson scored the tiebreaking header in the 82nd minute and the Colorado Rapids rallied from a two-goal deficit to stun Minnesota United 3-2 on a rainy Saturday night at Commerce City, Colo.

Jack Price delivered a stellar pass off a set piece and Wilson made a well-timed leap and sent the ball sailing into the net to complete Colorado’s stunning second-half comeback.

Kellyn Acosta and Cole Bassett also scored goals for the Rapids (2-1-1, 7 points), who emerged after trailing 2-0 at halftime.

Emanuel Reynoso and Hassani Dotson scored goals for Minnesota United (0-4-0, 0 points), the only MLS team without a point this season.

The winless start is surprising as the Loons reached the Western Conference final last season.

Colorado outshot Minnesota United 9-3 in the second half to end up with a 14-8 edge.

The Rapids picked up the pace after intermission and broke through in the 57th minute. After a couple strong opportunities were thwarted, a rebound caromed out beyond the box where Acosta was waiting and he drilled a bouncing kick through traffic into the net to bring Colorado within 2-1.

The Rapids knotted the score 14 minutes later after Minnesota United goalkeeper Dayne St. Clair was unable to corral a cross. St. Clair dove close to the net in an attempt to smother the ball but it bounced off him directly to Bassett, who easily sent the left-footed shot into the net.

Minnesota United was ahead early when Reynoso scored on a free kick in the 17th minute.

Reynoso sent a left-footer over the wall of Colorado defenders and curled it past the left hand of Rapids goalkeeper William Yarbrough and into the right corner.

Seven minutes later, the Loons struck again as Robin Lod closed in and spotted Dotson to his right. Lod sent the pass to Dotson, who sent the point-blank right-footed shot into the net.