Kansas City Royals pitcher Danny Duffy has been one of the team’s lone bright spots in a challenging season. With the MLB trade deadline approaching and rumors swirling, Duffy has established himself as one of the top trade candidates.

After spending time on the injured list with a forearm strain, Duffy recently made his return. While manager Mike Matheny used him out of the bullpen, allowing the southpaw to throw two innings, just returning to the mound is a great sign as trade season approaches.

Here are the three best fits for Danny Duffy.

The Toronto Blue Jays’ starting rotation has been a mixed bag, and their bullpen has been a loose cannon. Duffy can assist them in both regards.

Hyun-Jin Ryu and Robbie Ray have been sturdy forces. On the other hand, Steven Matz is inconsistent. Behind the trio, Ross Stripling is primarily a spot starter and Anthony Kay has struggled to get his feet beneath him in the big leagues.

Duffy would add another veteran presence to Toronto’s rotation, helping support its high-octane offense in games. If the Blue Jays want to stick with their current rotation, which entails banking on rookie Alek Manoah sustaining his heroics, Duffy can serve as a long reliever and a bridge to the ninth inning.

Toronto could use both a rotation and bullpen acquisition, the latter a more pressing need. With that in mind, it may refrain from a move for a rental with the mindset that it must acquire an elite reliever and that its rotation has the upside to make strides. 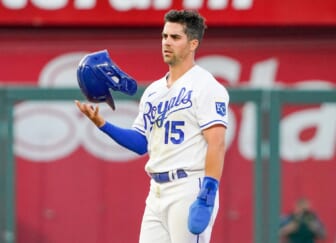 The Philadelphia Phillies’ struggles are tied to a recurring issue: a top-heavy rotation and shaky performance on the hill in the late innings. Duffy would be a savvy pickup for manager Joe Girardi’s ball club.

Zack Wheeler has been stout, and Aaron Nola just tied an MLB record. Outside of the pair of right-handers, the Phillies’ rotation has been a guessing game. The standard must be higher to make the MLB Playoffs.

Duffy would add stability to a precarious unit. Albeit one could argue that Duffy’s production will taper off as the regular season progresses, the southpaw presents as good, if not a better option to take the hill than the bulk of their starters.

The other option for the Phillies is to have Duffy take on a prominent role out of the bullpen. Philadelphia’s bullpen entered Sunday with a 4.41 ERA. The club struggles to get the ball to their backend relievers, and even the late-inning options are inconsistent. Duffy could get six outs a couple of times a week, easing the burden on their bullpen and/or grow into the closing gig if matters don’t improve.

Why wouldn’t the Phillies make a move for the veteran starter? They may view themselves in need of making a more resounding move for their roster that significantly enhances their playoff chances, as their core has continually underachieved.

No one expected the Chicago Cubs to be this good. Preseason forecasts thought this would be a .500-ish club, shopping Anthony Rizzo and Kris Bryant at the trade deadline. Instead, Chicago could be buyers in July thanks to a 42-34 record that puts this team in the playoff hunt.

Outside of Kyle Hendricks, manager David Ross has received little length and reliability from his rotation. In fact, Chicago’s starting rotation entered Saturday 19th in MLB in innings pitched (376.2). Hendricks hasn’t even been his stellar self, as he owns a 3.84 ERA.

Duffy represents an imminent upgrade for the Cubs’ rotation. He works out of trouble, logs strikeouts at a steady rate and is pitching the best baseball of his career. He adds a comforting, veteran presence to a rotation with underperforming veterans. Chicago’s bullpen has been superb this season, but its rotation needs to ease the burden on the relievers. Otherwise, the consequences will come late in the year.

If the Cubs acquire Duffy and he underwhelms or fellow veterans Jake Arrieta and Zach Davies turn a corner, Ross can put Duffy in the bullpen as a long reliever. He would take some outs away from their relievers. Plus, the Cubs have been trying to keep payroll down. Playing on an expiring contract, Duffy fits everything the Cubs need.