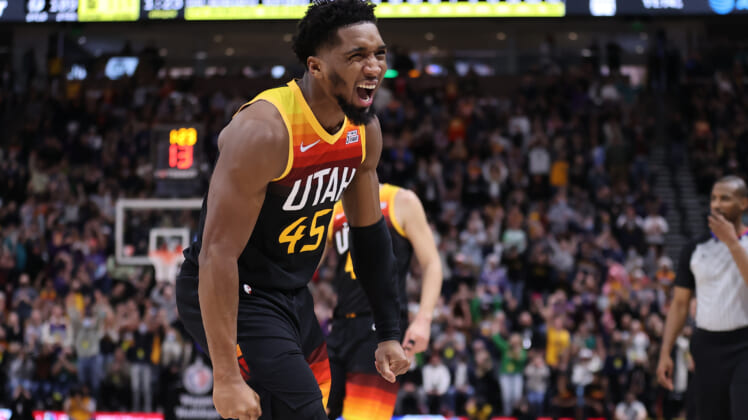 Danny Ainge sure is shaking the foundation since joining the Utah Jazz in December of 2021 as the CEO of basketball operations. Obviously, the Rudy Gobert trade was monumental, which naturally has led to speculation that a blockbuster Donovan Mitchell trade could soon follow.

With the Jazz publicly indicating that Mitchell isn’t “untouchable” in trade talks, the rumors will likely only continue to grow.

While these are reportedly just whispers, with no real source attached to who’s spreading these secrets, it’s tough to know what to think of the Mitchell speculation. But, the trade the Jazz made to ship out Gobert does seem to align with these ‘whispers’. It wasn’t a move to win-now, or anytime soon. As Jazz general manager Justin Zanik stated, their win-now window has closed.

Donovan Mitchell trade on the horizon?

If these rumors are true, then what are the Jazz waiting for? Why don’t they just trade Donovan Mitchell already? It could be that they’re also awaiting a potential Kevin Durant trade to see who else might become available, or even just what type of offer he commands.

Another possibility is that they haven’t been blown away by any trade offers just yet. The Gobert trade package clearly was enough to offer long-term intrigue, yet trading Mitchell, who’s five years younger than Gobert, should cost a similar amount.

Yet, Mitchell also doesn’t have nearly the accolades that Gobert does, though the local fanbase is clearly not looking to trade their star player either.

Putting together a trade package for an elite player who’s still in the prime of their career as Mitchell is won’t be easy. But the Gobert trade set the bar, now the Jazz may be looking to clear it once again, with their other star. That might not happen though.

While they enjoyed six years of making the playoffs, five of which were with Mitchell, the Jazz moved on from Gobert. Could Mitchell be next?

It likely all depends on the trade offer they get. If the offers aren’t to their liking, there’s no reason not to continue holding onto Mitchell, he’s under contract through at least the 2024-25 season and his value isn’t likely to disintegrate. Instead, teams may even become more desperate to land what they feel could be their missing piece, despite what Ainge may or may not privately think.